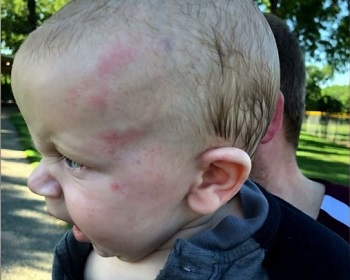 She is due to appear in court on October 4th.

It has been 98 days since Glen was found badly beaten and vomiting, with injuries so severe that they often lead to permanent damage.  Thankfully, the now nine month old appears to have made a full recovery, though doctors are continuing to track his progress.

June 20th, Sarah Braun knew something was wrong when she picked up her two children from a home daycare in Shawnee Kansas.

Sarah said that her son and daughter were both fine when she had dropped them off at 8am, but when she picked them up, the daycare worker was holding her 6 month old son, Glen.  He had vomited all over himself, and Sarah was informed that he had been vomiting for a while including on his Pack 'n Play and another child.

A short time later, after getting him home and cleaning him up, Sarah reports that it became clear to her and her husband, Brett Braun, that their son was more than just sick.  Brett said that, “As soon as I started holding him, he vomited all over me. He had a red mark on his face.”

When the vomiting didn't stop overnight, the Braun's took their child to visit the pediatrician the following morning.  Before long, they were transferred to Children's Mercy Hospital for a head C.T.

“The head C.T. showed that he had a brain bleed. From there they told us there were signs of abuse. They got the police involved and child services,” Brett Braun said. “I was absolutely devastated. I mean he is 6 months old. I don't know how anyone could ever hit him or do anything to him.”

The following Monday morning, Kansas Department of Health and Environment ordered an emergency suspension of the daycare's license as Police continue to investigate the matter.  As it is ongoing, they have not made any additional statements beyond that they are investigating a matter of battery with possible internal injury.

“I don't really know what to say," Brett stated.  "We did all the proper steps.  We went on the state website. We interviewed her. We did everything we should. I don't know the right answer.”  Monday morning though, he was stationed outside of the home where the daycare was located, holding a sign and hoping that he could somehow stop this from happening to another parent.  “I’m this tough guy that balled his eyes out this weekend, and absolutely I’m going to get more involved.”

At this time, the owner of the day care has not been charged.  Police say though, they expect to present their evidence to the Johnson County District Attorney by the end of the week. It will be up to that office to decide if criminal charges will be filed.

This is not the only daycare to make headlines recently.  The same week, an Ohio mother made headlines when she stated that her child was returned to her "lifeless" when she picked the infant up from a Cleveland day care.  Despite issues with the state previously, Nana's Home Daycare denied any wrongdoing saying that they had told the mother before that the infant needed to see a doctor.  Since, the preliminary medical report has been released which indicates no trauma or suspicious circumstances concerning the infant's death.