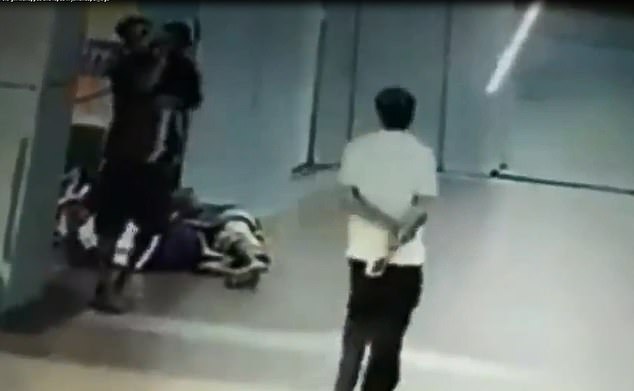 A mother woke from a nap at a train station to realize her reality had turned into a nightmare.

The mother had recently left her husband, and traveling with her new lover and three year old daughter, settled in for a nap before boarding the next train at Tatanagar railway station in Jharkhand state's Jamshedpur city at the end of July.  Napping close by was her daughter.

Security cameras* in the station captured a chilling scene just moments later, as a man, Rinku Sahu picks up the groggy child and walks out of the station with her, followed closely by a man only identified as Kailash.

Sahu, described as being in his 30s, was recently released from prison where he had served a sentence for kidnapping and attempted murder of a child in 2015.

Once the mother woke, she frantically called police and said that she suspected her new lover, Monu Mandal had played a role in her daughter's abduction.  He was the third man arrested in connection to this case and is being investigated for human trafficking.

Sahu and Kailash confessed to police that they had raped the girl over the course of a day and eventually strangled her because she would not stop crying.  While they directed police to where her body could be found, in a plastic bag hidden by bushes, they did not disclose either why they had decapitated the child or where her head was.  It has not yet been located.

Sahu's mother is even receiving scrutiny from this case as she works as a constable, and according to NDTV, neighbors are beginning to feel that her position has allowed her son leniency in the numerous times he's been charged with abduction and sexual assault of children.

*The Daily Mail UK has the security camera footage on their site at the link provided, but as the child's face has not been blurred, we chose not to embed it here.