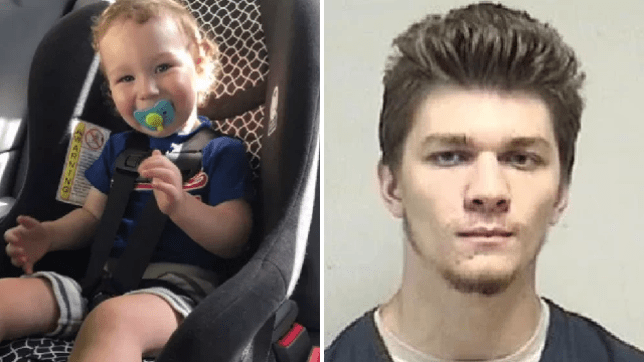 Matthew Bolsinki was battered to death at day care, with his eyes changing color afterwards. Hunter Jones has been charged with his murder (Pictures: Fox6)

On March 27th, Katherine Bolinski, 27, dropped her son, Matthew Bolinski, 2, with Harmony and Hunter Jones at their Kenosha, Wisconsin home.  According to reports, the couple had been caring for up to 12 children in the days leading up to Matthew's death.

Katherine told Fox6 that she regretted leaving Matthew that day and wishes that she could have that day back.  She told them that Matthew threw a fit like no other when she went to leave him there, and that is the last memory she has of her son.  The next time that she would see him was in a coroner's office.  "His eyes went from a deep blue, to really, really light blue. Bruises all over his face. I lost it. I just couldn't hold it back," Bolinski said.

Earlier this month, Hunter Jones was charged with first degree homicide, and he appeared in court for the first time last Friday, July 12th.  A detective with the Kenosha Police Department testified, and Jones was bound over for trial. An arraignment was scheduled for August 1st.

The autopsy report showed that Matthew had eighteen contusions on his head and neck, but listed the official cause of death as "undetermined."  It sited asphyxia as the likely cause.

Jones placed a call to 911 with regards to Matthew, but according to reports, took over four minutes to tell the dispatcher that the child was unresponsive.  Instead, he told them, 'This child has some sort of mental issue. He throws tantrums. He threw a tantrum. He jumped out of the playpen and hit his head and stuff like that. He has a history of this; we have messages, you know, like talking to her about it.'

By the time first responders got to the residence, they reported that it appeared as though the toddler had been dead for at least an hour.  When asked why he didn't tell the dispatcher the child was dead, it's reported that Jones stated that he didn't want to think Matthew was dead.