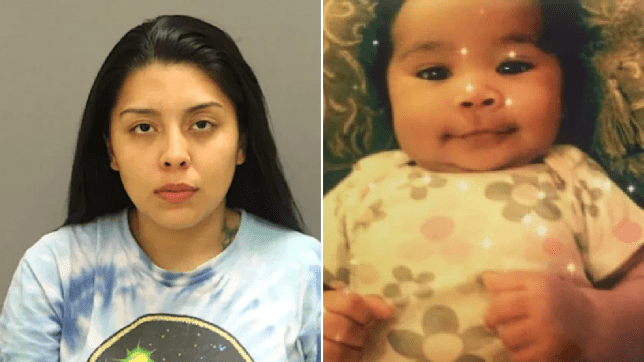 Kahoy Garcia-Velazquez, 21, of Chicago, Illinois appeared in court Wednesday to answer to a first degree murder charge concerning the beating death of her 16 month old daughter, Mila Anderson-Garcia, on July 13th.  Judge Mary Marubio ordered her to be held without bail, and she is scheduled to be back in court on August 9th.

According to an autopsy, Mila died of injuries related to child abuse, including a lacerated liver, trauma to the intestines, bruising to the head, cuts on her face, and a bite mark on her buttocks.  Garcia-Velazquez stated that another child had caused the bite mark and that the other injuries were a result from Mila falling from her bike.  Prosecutors stated that those explanations proved to be medically impossible.

Garcia-Velazquez spent the night out on the street, by her own admission, seeking pills and returned home around 6am.  Her boyfriend, who had cared for Mila overnight, left for work at 7 am and stated that he had seen Mila before he left and that she appeared healthy.

By 9:40 am, Garcia-Velazquez was running to her mother's house claiming that Mila wasn't breathing and wouldn't wake up.  When first responders arrived and tried to administer CPR, they found that her jaw was already stiff with rigor mortis.

Garcia-Velazquez was arrested Monday while at a funeral home making arrangements for Mila, a public defender said in a statement Wednesday.