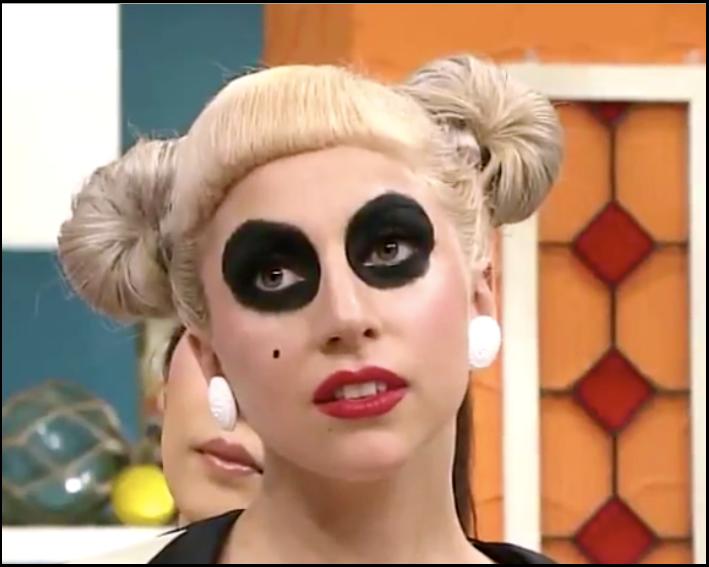 How many of these seemingly random, innocuous Hollywood fashion trends are more than meets the eye—or, in this case, a couple of black ones?

This macabre maquillage is anything but becoming, so what exactly is going on here? And what do you need to know before you let your daughters and granddaughters out the door unwittingly brandishing this Babylonian ritualistic war paint?

The queen of kook removed her sunglasses to reveal blacked-out panda eyes, which she paired with a single raised paw – one of her trademark poses.

“Pandas have paws, and I always tell my fans to put their paws up.”

Gaga told the show’s hosts she’d been “eating a lot of bamboo this week” and on top of making more music, she hoped to one day “have panda babies.”

Now for the real scoop. “Panda eyes” is a cute, innocent way of referring to Dypyoga. Dypyoga is p@doph1le slang for “child sodomy.” (Please note that this is a slang term used amongs the p@do community—not the actual dictionary definition.)

GRAPHIC DETAIL WARNING for my sensitive readers: “When a child is forcibly sodomized, their eyes can welt to black circles due to the blunt trauma involved, making their eyes look like that of pandas.”

Because it is my desire to obey the command of Ephesians 5:11, which is to not participate in the unfruitful deeds of darkness, but to instead expose them—I am writing this article to inform, NOT to titillate or conjure up unholy curiosity that will cause my brothers and sisters to stumble. Ephesians 5:12 goes on to warn us that it is disgraceful to speak of the things that the wicked do in secret. That is why I have no interest in all the salacious details of what these Hollywood SICKOS are up to—dolling up Lady Gaga as a means of influencing young people to unwittingly mimic one of the tragic physical side effects of child rape.

This is contemptuous, sick, perverted, twisted, evil, and wrong. But Ephesians 5:13 tells us that all things become visible when exposed by the LIGHT and we cannot pray for, fast for, intercede for, or rescue abused and victimized children if we have no idea what is going on. (Nor do we wish to unwittingly mock them by ignorantly imitating occult-inspired fads disguised as cutting-edge fashion trends.)

And don’t think that these “panda eyes” are the first thing to come out of Hollywood (or Saks 5th Avenue) that are hat tips to Babylonian gods and demons. The beehive coiffure (elongated skulls), devil horn hairdos (Baphomet), red sole high heels (you don’t even want to know…) these and many, many more are not mere random trends from the minds of creative, artsy, fashionistas—they are throwbacks to Babylonian and Sumerian occult worship rites, and their gods and goddesses.

I have heard many a-sermon abusing 1 Peter 3:3, explaining that a woman can’t wear makeup or a ponytail holder without being a strumpet. This leads to all sorts of unbiblical church traditions where women must don dartless thrift-store attire and parade around in pious frumptitude. I rather like the 1977 New American Standard version of 1 Peter 3:3, “And let not your adornment be merely external—braiding the hair, and wearing gold jewelry, or putting on dresses.”

This doesn’t mean that we are unlike the women of the world because they adorn themselves and take some pride in their appearance and we do not. It means that the world is only concerned about their outward appearance, and we are concerned with both our outward and our inward appearance as well. We do not do less than the women of the world, but more. And this panda eyes craze should awaken all of us women to be sober minded and vigilant, and to prayerfully consider what trends we follow and which ones we leave in Babylon.

UPDATE 7/17/2020: Here’s another example of Hollywood rubbing our noses in it. Check out this “Truth in plain sight” scene (0:08) from the 2014 Adam Sandler, Drew Barrymore film, “Blended. The clip was posted to You Tube back in 2016 and I find it very interesting that an “innocent” clip of a cute actress from a film has to have the comment section turned off. Hmm, I wonder why??? Maybe because 2016 is a bygone era, as 2020 woke up tens of thousands of Americans to the twisted crimes of the elite and we will no longer be silent about these crimes against our children! Shut off the comment sections all you want, You Tube–you will NOT silence us.

To read more on how Hollywood hides Luciferian symbolism within the world of modern art and fashion, click HERE.

For articles related to the cult of Hollywood, see also: