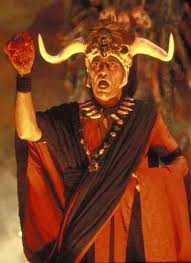 Where were you in the summer of 1984? I don’t know about you, but I was tucked deep within the bowels of an overly-air-conditioned movie theater, Swedish Fish in hand, watching Indiana Jones and the Temple of Doom. I think I saw it at least three times in the theater.

In this second installment of the trilogy, swashbuckling archeologist, Dr. Jones, is commissioned by a village of desperate parents who charge him with the task of locating a mystical stone stolen by a Thuggee cult who had kidnapped all their children and forced them into an underground world of child slavery, black magic, and ritualistic human sacrifice to the goddess Kali.

Wow. Thank heavens this kind of sadistic stuff only exists in the creative mind of film maker Steven Spielberg, and not real life!  Man, where does he come up with this stuff?!

If you were like me, all outdated CGI effect jokes aside, the scene where high priest, Mola Ram (replete with Baphomet horns), chains his victim to a cage and after mumbling something to the effect of “el tude ah rum, el tude ah rum,” rips the still-beating heart out of his victim with his bare hands.

The scene had such a profound effect of terror upon me as a then-12-year-old child, that I will forever correlate the act of ripping a beating heart out of a human being with ritualistic, black magic ceremonies and blood letting as a means to appease a god. But, that’s a no-brainer, right? I mean, where else are you going to find grown men ripping hearts out of human beings?

I’m rather sorry you asked.

If you are a sensitive reader, you will want to gloss over the next paragraph, or perhaps even the remainder of this article. The information I am about to disclose came from a 2020 survey sent to my house from the Americans United for Life (AUL) organization. The very first question on the survey was prefaced with this bit of information:

”Undercover investigative videos by the Center for Medical Progress reveal that one of Planned Parenthood’s major businesses is to slice out the internal organs of babies during an abortion, and then sell the babies internal organs to the highest bidder. Often these babies are in the process of being born (in the breach position) so they can begin slicing into the child, pull out the heart while it’s still beating and while the child’s feet are still kicking. One ‘organ procurement technician’ reports that scissors are used to cut through the face of the baby to get to the brain and cut out the eyes while the baby is still alive. The baby feels unimaginable pain. This is a multi-million-dollar-per-year business for Planned Parenthood.”

Ladies and gentlemen, abortion is NOT a medical procedure. Medical procedures are typically designed to save lives, and the use anesthesia, pain medication, and sedation techniques are always employed, if and when possible, to put patients at the greatest amount of ease and suffer as little pain as possible.

So, the first question is, “Why in the world is Planned Parenthood harvesting and selling baby body parts on the black market?”  Once society accepts this behavior as normal or acceptable, the next question would be, “Okay, sickos, if you are going to do this, why can’t you at the very least harvest the organs out of the baby once the child is dead?”

The answer is, first and foremost, because this is a black magic, occult, bloodletting ritual in honor of the god Molech. The second reason is they are not just harvesting the body parts, they are also harvesting adrenalized blood. And the third reason is because, as previously stated, this is a multi-million-dollar-per-year paycheck for Planned Parenthood.

I do not get any enjoyment out of writing articles like this, but it is vital that we understand abortion is NOT a medical procedure. It is NOT a political issue. And it is NOT about female reproductive fights.

And as soon as we are able to BELIEVE that Planned Parenthood is capable of this practice, perhaps it will not be a stretch of the imagination to believe that these procedures go on outside the doors of abortion mills, as well as inside.

If you believe Planned Parenthood is murdering babies and selling their body parts on the black market, why would it be so difficult to believe the Hampstead case, or the testimony of Alisa and Gabriel? It makes zero sense to open a blind eye to Planned Parenthood, while turning a blind eye on the victims of satanic ritual abuse; when in reality, they are in essence the same thing—one of them just makes a lot more money and yields a lot less survivors.

If we must believe the testimony of every single Hollywood starlet in the #MeToo movement cart blanche, regardless of any tangible evidence, then for God’s sake, please believe children like Alisa and Gabriel who come with eyewitnesses and boatloads of physical evidence.

And whoever welcomes a little child like this in My name welcomes Me. But if anyone causes one of these little ones who believe in Me to stumble, it would be better for him to have a large millstone hung around his neck and be drowned in the sea. Woe to the world for the causes of sin. These stumbling blocks must come, but woe to the man through whom they come!…

UPDATE 8/5/2020: Incredible! Just one day after writing this article, this opinion piece was sent to me. Life News.com reported that The Satanic Temple (TST) believes that abortion should be protected as it falls under laws pertaining to “religious ceremonies.”

The Satanic Temple admitted proudly Wednesday that, in their belief system, killing an unborn baby in an abortion is a religious ritual similar to communion or baptism for Christians. The Satanic Temple is proud to announce its Religious Abortion Ritual, a ceremony rooted in our deeply-held beliefs,” the group said in a video announcement on YouTube. “Thyself is thy master. Hail Satan!”

If you didn’t believe me yesterday, believe the TST today–they are telling us plainly–abortion is a religious ritual, and it plays an integral role in their religious tradition.