“We don’t give up and you never close a murder case,” said Tallmadge Police Chief Ron Williams. “We really represent the victims and in this case, we’re standing up to a bully who brutalized women in the 70s.”

Last Friday, police showed up at the Tallmadge apartment of Gustave Sapharas, 75, and arrested him on an eight count indictment handed down from Summit County.  The charges include kidnapping, murder, aggravated murder, attempted rape, and maiming or disfiguring another.  He is being held at the Summit County Jail.

Investigators are being fairly closed lipped about how they obtained the break in these two cases, asserting that the information will be revealed throughout the course of litigation.  What they are saying though, is “new technology, a fresh set of eyes and great, great detective work,” should be credited according to Williams.

The two cases that Sapharas is being tied to at this time are those of Karen Betz, who was found April 28, 1970 at the age of 18, and Loretta Jean Davis, found September 28, 1975 at the age of 20.  Police are currently looking into whether or not Sapharas is tied to the slaying of Kathy Wiltrout Bevington, 27 who went missing in October of 1972 and was found six weeks later by a hunter.

Both Betz and Davis were abducted, sexually abused, and stabbed at least a dozen times before their bodies were dumped along the side of the road.  According to the details of the indictment handed down, it suggests that Betz was was tortured before she died. 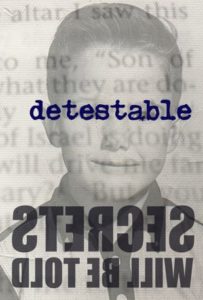 Sapharas has stood before a jury before on charges concerning a cold case in Licking county.  He stood trial in 2017 for the 1991 stabbing death of Bonita Parker, 21, who was discovered on August 13th along Mill Street near Route 16.  The slaying fell within an 11 month window where Sapharas was paroled from prison for rape and weapons charges.  He returned to prison in October of 1991 on a parole violation.

Despite his DNA being confirmed on the body of Parker, the jury found him not guilty in that case.

His arraignment was scheduled for Wednesday morning, but was delayed until Friday morning to give time for him to be appointed legal counsel.  WKYC 3 stated they intend to stream the hearing as it happens.

17-year-old arrested for killing 6 in Indianapolis