Yesterday morning, an unnamed driver drove their orange Pontiac Vibe up to the back exit gate of the Pittsburgh FBI office, parked it, and walked away. A short time later, shortly before 5 am, guards noticed the car and notified officials.

“Shortly after that our guards noticed the car at the back gate and alerted our security professionals and made sure that the proper protocols were filed so that we could get everybody here to figure out what was going on with this vehicle,” FBI spokeswoman Catherine Policicchio said.  "We take all of these situations very seriously. We can't let our guard down through any of this. We always have to make sure that we investigate fully, and that we know what's inside those cars."

The vehicle, which was described by Policicchio as having  “gibberish-type language” on it's side, was determined to not be of any threat by local law enforcement and bomb squad and was towed away for evidence. 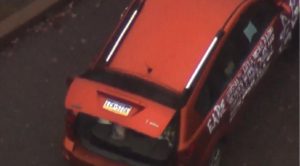 The vehicle had the same stenciled message on both sides with the added, hand spray painted message on the front fender of the passenger side that "Russia pretends to be CIA," and across the hood in black, "Spygate."

As of this morning, the driver of the vehicle who has been described by Policicchio as "appears to be suffering from an unknown mental illness," has turned himself in.  "With the assistance of his family, he is now receiving help. His name will not be released. As a result of our investigation, we have determined there were no threats to public safety."