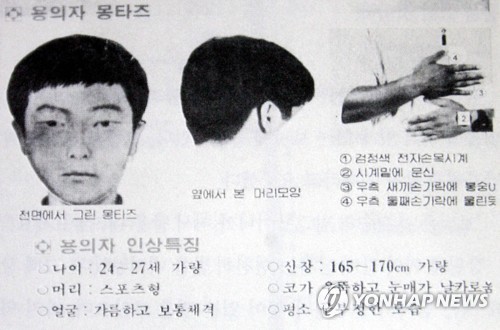 This file photo shows a wanted leaflet containing a composite sketch of the suspect for a serial murder case that took place in Hwaseong, south of Seoul, in the 1980s. (Yonhap)

UPDATE: Gyeonggi Nambu Provincial Police Agency stated in a briefing on Wednesday, October 2nd that 56 year old Lee Chun-jae has confessed to a total of 14 rape-murders, and about 30 additional rapes and attempted rapes.

Nine of the 14 rape-murders that Chun-jae confessed to are the nine cases known as the "Hwaseong murders" which he had previously denied involvement in.

Police are looking into his claims as they state, there are some irregularities in his accounts of the crimes.  He has evidently been interviewed by veteran profilers nine times at Busan Prison.

Despite his confession, Chun-jae cannot be tried in these case as the statute of limitations has already.  Despite the expiration though, the police continued to maintain their records and check back on the cases from time to time.

Beginning in 1986 and spanning to 1991, ten female victims were found raped and brutally murdered in Hwaseong, located in Gyeonggi Province, south of Seoul.  The victims ranged in ages from their teen to 70 years old.  It is said that in many of the killings, a piece of the victim's clothing was used to strangle them.  Despite their best efforts, police were never able to find the person responsible.

This series of murders is said to have been the inspiration for Bong Joon-ho's 2003 thriller 'Memories of Murder.'

Police determined, according to the South China Morning Post, that the eighth victim was killed by a copycat killer.  That killer was located and charged.  That left nine women though, that police felt confident were the victim of one killer.

“In July this year, we sent part of the evidence to the National Forensic Service, the result of which show that the DNA of the suspect matches at least three of the cases,” officials said.  A record number of police have been mobilized to work on this case in determining if the man in question is responsible for the remaining nine.

According to South Korean media, the suspect is Lee Chun-jae, now in his 50s, who is currently serving a life sentence for a very similar crime committed in 1994.  In that case, he is said to have drugged, raped, and brutally murdered his sister-in-law with a hammer.