Chambersburg, Pennsylvania: An investigation that took over two years has resulted in the arrest of a drag queen in Pennsylvania where he has been charged with 25 counts of possession of child pornography and one count of criminal use of a communication facility.

26-year-old Brice Patrick Rysh Williams, who performs under the name of Anastasia Diamond, remains behind bars at the Franklin County Prison.

At his initial appearance on Thursday, June 23, his bail was set at $100,000. His preliminary hearing has been schedule for July 5 at 8:30 am before Magisterial District Judge Kristin D. Nicklas.

In addition to extensive involvement with the LCBTQ community throughout Franklin County, Tri-State Alert states that Williams is a licensed social worker and that he obtained his Masters Degree in Social Work from Shippensburg University. 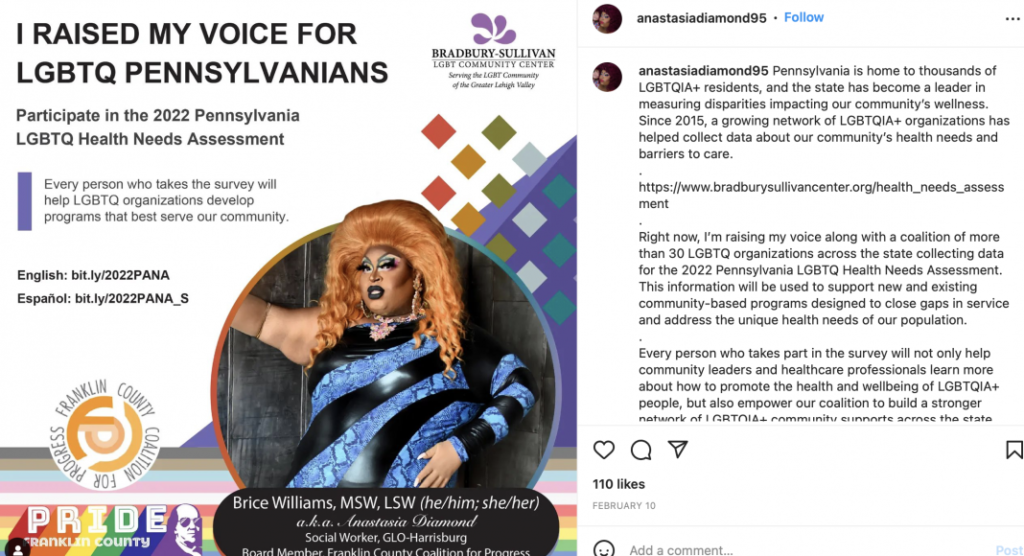 The investigation into Williams began May 18, 2020 when the National Center for Missing and Exploited Children provided a tip to the Pennsylvania Office Of the Attorney General's Child Predator Section concerning content discovered in a Dropbox.

At that time, 76 images which appeared to potentially depict explicit child pornography had been identified as being uploaded to the account on or around May 2, 2020.

After review of the images, it was determined that 49 of the 76 images appeared to depict minors under the age of 18.

Two months later, in July 2020, the National Center for Missing and Exploited Children provided a second tip to the Child Predator Section concerning ten more images. It was later determined that at least 9 of those images involved minors.

During the course of the investigation and while subpoenas were submitted to Dropbox and eventually search warrants were executed, images continued to be uploaded to the account.

But the time investigators searched the account on October 23, 2020, 135 images, including the previously reported files, were discovered. In December 2020, two more images were loaded to the account.

The investigation reportedly continued throughout 2021, and it was not until June 22, 2022 that Special Agent Travis Nye was able to obtain a search  warrant for the Chambersburg residence where Williams lived. The search warrant was executed the following day.

William initially denied ever seeking, processing, or sharing images that depicted the sexual abuse of children, but after investigators confronted him with 25 videos recovered from his cell phone, he allegedly confessed.