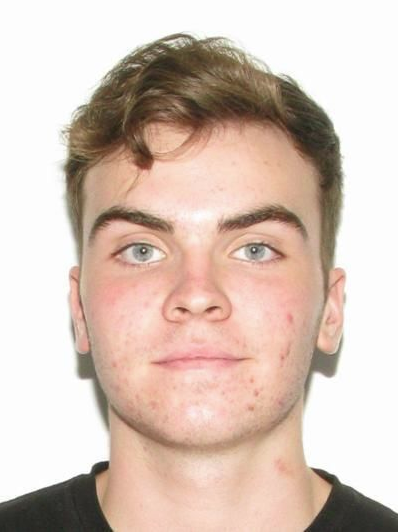 Matthew Bernard, 18, has been charged with three counts of first degree murder.

UPDATE:  Thursday, September 12th, Judge Brian Turpin approved the request made by Bernard's court appointed attorney, James Martin, for sanity and competency evaluations.  Revealed in the request is the fact that Bernard is in the custody of the Commissioner of Behavioral Health and Developmental Services.

He is due back in court on November 6th.

Tuesday afternoon, a naked Matthew Bernard was taken into custody after a four hour manhunt.  He emerged from some trees in Keeling Virginia near the North Carolina border and ran past some news cameras in a staging area.

He then ran into the parking lot of Kneeling Baptist Church where he attempted to strangle the groundskeeper.  Officers sprayed Bernard with mace, and hit him with the baton before managing to take him into custody at a barricade with the backup of a police K9.

While being transported, Bernard was reported to have banged his head against the cage in the patrol car and had to be transported to the hospital for treatment.  He was released from care and booked into the Pittsylvania County Jail on three counts of first degree murder and was placed on suicide watch as of Wednesday.

He was evidently scheduled to be arraigned on Thursday morning, but the arraignment was rescheduled as Bernard was being hospitalized. The Pittsylvania County Juvenile and Domestic Relations Court Clerk's Office disclosed that as of 8:30 Bernard was at the hospital, but would not disclose which one or why.

Tuesday morning a call came into 911 reporting a shooting.  When police responded, they discovered Joan Bernard, 62, in the driveway and Emily Bernard Bivens, 25, inside with Cullen Bivens, 14 months.  While police have not confirmed the causes of death, the caller to 911 clearly reported the use of a gun.

This story has been circulating throughout may different outlets due to the fact that the husband of Emily and father of Cullen is the pitcher of the Montgomery Biscuits, a minor league team affiliated with the Tampa Bay Rays, Blake Bivens.

According to Bernard's uncle, Bryant Bernard, the teen had been having nightmares lately.  He told WSLS that "He expressed to his mother last week that he was having bad dreams, and that he'd seen demons around his bed."

According to Bryant, on Tuesday morning, "He woke up, he said something to his mother that something's going on and 'it has to stop today' and he left. They never saw him again until the point of where (his mom) got back home and that's where she confronted him."