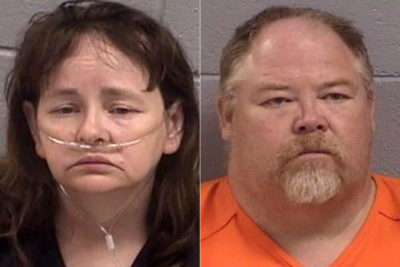 When the San Juan County Sheriff's Office arrested an adult male for assault with a deadly weapon, they didn't think they were handling more than a simple family dispute.  On May 30th, Timothy Couch, 31, was arrested after a fight with three siblings concerning food which resulted in him pointing a firearm at them.

Jayme Harcrow, a spokesperson for the sheriff's office said, "It's an ongoing investigation, that is going to take us some time."  "Hundreds of pages" are coming in from multiple states that had begun investigating complaints against the Couch family concerning their 15 children, (eight sons, and seven daughters).  Evidently as soon as they would become aware that social service agencies were looking into them, they would relocate, so law enforcement is now piecing together the family history as reports come in from Alaska, Kansas, Missouri and Montana.

The couple is due to appear in court today.

Court documents paint a horrible picture of life in the Couch home.

Primarily centering on the account of a 17 year old daughter, she describes walking into the kitchen in October of 2018, after being told by her mother that she was cooking something special, to find a litter of puppies in a large pot boiling on the stove.  She states that the same day, her mother shot her dog, and buried it in the back yard, not wanting to get in trouble with law enforcement again, for having animals in the burn pile.

In another incident, a daughter that became pregnant at 14, was beaten until she miscarried.

Another daughter stated that she was kept on a "fat chain" for three years when the family lived in Alaska, after her mother concluded that she was overweight.

The 17 year old daughter also disclosed that her mother had fed a kitten poison, and beat her for asking why she and her siblings were not allowed to go to school.

After this beating, two of her older siblings picked her up and brought her to Arizona for safety.  As of Tuesday, four of the Couch's minor children are in the custody of New Mexico Children, Youth, and Family Department.