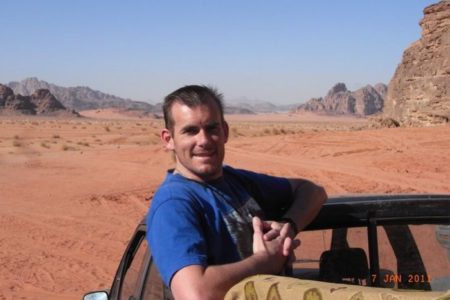 Nigel Chaytor, 43, had a life changing experience in 2007 when his grandmother died.  That is when he said he began to display psychic abilities.  In 2013 he claimed that he was visited by aliens while in his home, and by 2014, he was involuntarily admitted to a hospital due to a psychotic episode for five weeks.  Medical staff at Armadale Health Service regularly followed up with him until January 2018, encouraging him to continue with the anti-psychotic medications he had been prescribed for his delusional disorder and schizophrenia.

Two days before Chaytor attacked his parents, his father, concerned about the mental state of his son, reached out for help.  The mental health triage team informed Keith, 72, they they would schedule a trip to assess his son while he was at work.  That meeting never happened.

Early in the morning on April 27, 2018, Chaytor walked into his parents' bedroom and turned on the light.  Keith told him to turn the light off before walking into the en-suite.  Chaytor followed him, and fatally stabbed him several times in the chest.  He then turned the knife on his mother, Estelle, 72, and stabbed her several times in the chest and neck.  Emergency services responded and rushed her into emergency surgery.  She survived the attack.

Police located Chaytor in a nearby park, covered in blood, with injuries to his hands. It's reported that he told emergency services that "so much stress is off me" and "I got rid of two evil, manipulative people, now I don't care about the punishment".

In a later, videotaped interview with Police, Chaytor stated, "My ancestors told me to do it. The doctors gave me tablets but I threw them out because I don't need them."  He also stated in the interview that he had no mental illness and that he had stabbed his parents because they were cult leaders which he had learned by doing a psychic case study with the Rosicrucian Order. "I've been tapped by the system, the tapping of a mind program going on around the planet," he said in the interview.

Chaytor has plead not-guilty due to unsoundness of mind.  His case, a judge-alone trial, is being heard by Justice Lindy Jenkins in the Supreme Court of Western Australia.  Chaytor has been  held at a secure psychiatric facility since his arrest.  The trial is ongoing with the possibility of  Justice Jenkins delivering a verdict on Tuesday the 2nd of July.