What do Azazel the scapegoat, Tumlus the faun, Baphomet, and Pan all have in common?

As in the days of Noah, so shall it be at the coming of the Son of Man (Matthew 24:37-39). So, it’s only appropriate that for those not born with cloven feet in honor of the Baphomet, you can simply drop a couple hundred bucks and purchase a pair of slip on clovens, and thus bear the image of the god of this world.

Whether you call them creature feet, cloven heels, or demon hooves, it matters not. These hideous heels, while far from a mainstream fashion trend, are en vogue amongst cosplay and anime crowds and other fantasy footwear fan clubs.

The “hoof” shoe (Ikitabi) is a popular shoe and sock trend in Japan and has been around for thousands of years. Split toe neoprene boots are also standard footwear among surfers. So, no need to assume that everyone sporting these kicks are into Satan worship. 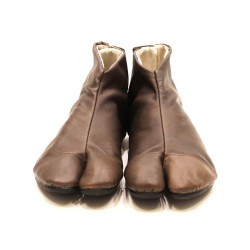 The shoes are definitely a niche market and are not always coveted by the most savory of customers. Take for example, Oonacat’s “demon hooves.”

“I guess I can kind of see now why some people are turned on by goats. Oonacat’s Demon Hooves, a pair of spiked, knee-high boots with cloven foot pads in place of typical toes and heels are pretty sick. I mean [sick] in the good way, not in the goat-sodomizing way.”

I don’t know what is more distrubing, that advertising blurb, or the fact that this item is currently sold out on Etsy. FYI, the website also includes a link to a video of the boot designer (Oonacat) rockin’ her goat boots in her living room. I haven’t seen the video, because when you click on it, you get a You Tube age-restriction warning. I don’t know about y’all, but I like to keep my shoe commercials Rated G. 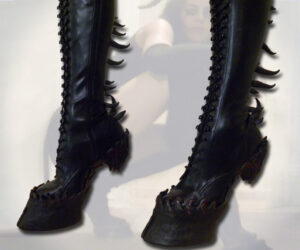 Unless you are a professional ballerina, I do not know what would possess a woman (pun intended) to wear shoes, not only this gawd-awful looking, but that would also force you to walk around on your tippy-toes all night. Charlie horse, anyone?

Interesting that this shoe designer refers to the boots, not as goat hooves, or cloven hooves, but as demon hooves. What exactly is the connection between cloven hooves and demons? As many of us already know, the Baphomet creature featured on the upside-down pentagram is part man, part woman, part goat. 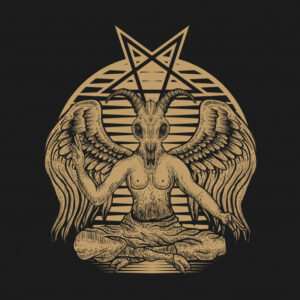 The goat has long been associated with evil/Satan. Azazel the scapegoat (Leviticus 16:10) that is released into the wilderness on the Day of Atonement shares a name with one of the Watchers in Enoch, who came down Mount Hermon to intermingle with human women, resulting in Nephilim progeny.

The half-man, half-goat creature is synonymous with “Pan” who is often associated with Lucifer or Satan. Modern fact checking websites are working to debunk this “myth” by explaining that, historically, Pan, who was depicted by the Greeks as half man, half goat, was a shepherd. Much like Jesus the “Good Shepherd” – Pan is there to tend to his flock and provide provision and watch care. The official narrative claims that it wasn’t until the panty waisted Church got ahold of Pan and elected him as their “bad guy” poster child, that Pan slowly morphed into a devil.

But the truth is, Pan was always seen (even by the Greeks) as a god of sexual deviance, rape, and torture—attributes of a devil. The Bible alludes to this devil/Pan correlation in Matthew 16:13-20 when Jesus and His disciples were at Caesarea Philippi. In verse 18, Jesus declares, “Peter, upon this rock, I will build my Church and the gates of Hades will not prevail against it.” Interestingly, but not coincidentally, Jesus and Peter were sitting at the foot of a grotto—a cave that in the 3rd-century would be a cult center in honor of the god Pan.

“Welcome to Banias, the Arabic pronunciation for Pan (Arabic has no “p” sound)—the city of the lusty half-human, half-goat flute-playing Greco-Roman god of shepherds and flocks, mountainsides, hunting and rustic music; he is infamous for his unfettered sexuality, and is often depicted with a super-sized erect phallus. The pagan cult site, also variably called Paneas, Panias, Panium and Panaeon, was considered to be an entrance to the underworld.” 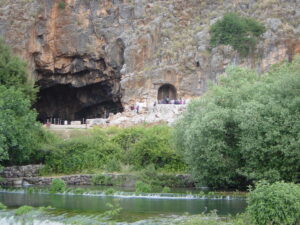 Pan has been reconceived for modern audiences, turning him into a playful Disney character, but Pan is far from kid-friendly. Click HERE for a disturbing, but enlightening, treatise on the life of James Matthew Barrie (author of the Peter Pan stories). The correlation between Barrie’s private life, the highly speculated goings-on at Michael Jackson’s “Neverland” ranch, and Pan are striking.

Pan not only shows up in the Disney catalog, but is also a predominant character in Shakespeare’s play, “A Midsummer’s Night Dream” (appearing under the name, Puck). And as long as we are talking about half-man, half-goat characters in literary fiction, sorry to trigger the Narnia fans out there, but am I the only one a bit disturbed over Tumnus the “faun” in C. S. Lewis’ Narnia series? A Mister who is later elevated to “Master” status in the “Golden Age.” First introduced to us as a half-man, half goat creature who intercepts a child at the Lamp-post, brings her to his house, plays his “pan” flute, drugs her, and is reduced to tears of guilt for “what he’d done” while she was asleep? I know, I know, the “official story” is that he was guilt-stricken because he was considering bringing her to the white witch. I get it, but sorry Lewis fans, given what we all now know about the elites, the Baphomet, ritual abuse, and Freemasonry, this scene measures way up there on my creep-o-meter.

Call it whatever you like—anime, cosplay, Halloween—strapping on a pair of goat hooves and hobbling around on them until your big toenail turns blue? Not my idea of a good time. And while the consumers may be purchasing these shoes in all innocence, do not be deceived—these elite shoe designers know exactly what they are doing—or should I say, these know exactly who they are worshipping.