The FBI has offered a $10,000 reward for information leading to the arrest of a man wanted on charges of child sex trafficking after he fled from his San Diego, California home in November 2019 after a federal arrest warrant was issued.

The Sam Diego Union Tribune indicates that he may have fled the county.

37-year-old Michael James Pratt "is wanted for his alleged involvement in a conspiracy to recruit young adult and minor women to engage in commercial sex acts by force, fraud, and coercion."  He is accused of coercing young women to create videos after contacting them through fraudulent ads.

The websites he ran, "GirlsDoPorn" and "GirlsDoToys" are said to have generated more than $17 million in revenue.

Anyone with information about Pratt's whereabouts is encouraged to call the San Diego FBI office at (858) 320-1800, or to submit a tip through tips.fbi.gov.. 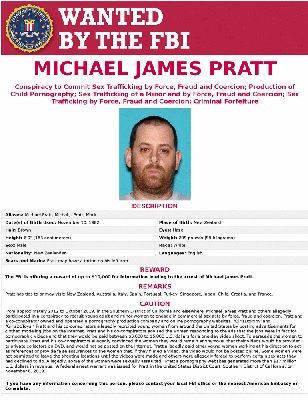