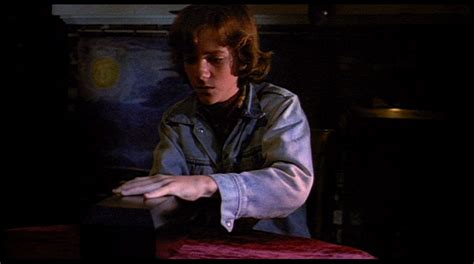 The Scriptures instruct us no less than 365 times to fear not. But, for some reason, the words that proceed out of the mouth of Almighty God holds little water for this modern Church age. The ‘words of wisdom’ jamming our social media feeds hold far more weight than those antiquated little red-letter quatrains hidden betwixt our dusty Bible covers.

So, allow me to quote from a well-respected source among most American evangelicals: Hollywood. (Admit it—the most powerful lines in your pastor’s weekly sermons are usually from the movie clips on the jumbotron, right?)

Phantasm was a creepy mish-mashed genre sci-fi, fantasy, horror flick produced in 1979. The antagonist of the film—a supernatural undertaker, ambiguously monikered The Tall Man, would steal recently-deceased bodies from the morgue and transmogrify them into dwarf zombies and ship them off to his planet where they would be put to use as slaves. After losing both his parents, an inquisitive teenage boy named Mike discovered the plot and went head-to-head with said Tall Man and his stainless steel, brain-drilling, flying sphere.

At one point in the film, Mike visits a medium—an old blind, mute woman referred to as Grandmother. Through an interpreter, Grandmother instructs Mike to put his hand in a box.

Grandmother:  “Just put your hand in the black box.”

(Mike gains control of his fear and the pain stops, enabling him to pull his hand free from the black box)

Grandmother:  “It was simply reflection. Fear is the killer. That’s what Grandmother wants

Grandmother:  “It was all in your mind.”

All in your mind. Hmm?

Am I saying COVID is all in our mind? No. Coronaviruses have existed for a long time. Doctors and scientists have known about them for a long time. And elderly men and women and people with pre-existing conditions such as Diabetes, obesity, and respiratory issues have always been more susceptible to getting seriously ill when they contract them.

“The only thing we have to fear is fear itself!”
Franklin Delano Roosevelt

But perhaps what isn’t real is the illusion that our fear doesn’t allow us to see past. Such as believing that non-constitutional, unenforceable governor-issued “mandates” are laws that we must obey. Or that constricting our airflow and breathing in our own bacteria-infested spittle all day is somehow protecting us from disease. Or that an experimental, non-FDA approved, mRNA-altering gene therapy injection is as harmless as a flu shot. Or that being forced to take part in an untested global medical experiment will return us all back to “normal.”

Here is where my theorizing comes in. I have observed an astounding thing over the course of the past 14 or so months. There are three general categories of people. (1) Those that buy into all this hook, line, and sinker. (2) Those who don’t buy into it, but inconsistently comply (depending upon the day). (3) And those who  think the whole thing is a politically-motivated, socially-engineered Marxist agenda designed to control the population.

But here is where it gets interesting. I find that in my circles, the people that I know who have bought into this hook, line, and sinker—the ones who are genuinely afraid of catching COVID or dying…are virtually the same demographic of people who have spent most of 2020 in and out of the ER and the hospital.

The people who don’t buy fully into it, but inconsistently comply, based upon their waning emotions on any given day,  are the ones that get harassed or thrown out of places when they do make a stand for their core beliefs. (e.g. when they get “fed up” and go out without a mask, they are met with hostility and confrontation by peers and store owners).

Then there are the people who absolutely do not give a rip. They aren’t hostile. They aren’t out there trying to prove a point. They just simply have no fear. These are the folks who have never worn a mask, and who don’t have the slightest bit of intimidation being “the only one in the whole store not wearing a mask.”

I know a lot of these people (I am one of them). And guess what—by and large, the people who have (1) never got tested for COVID, (2) never worn a mask, (3) never quarantined, (4) never went on lockdown or stayed at home, (5) never social distanced, (6) who have been around people who tested positive or who have had COVID, and who have (6) spent the whole year milling around in crowds of people…walk unmasked and unharassed wherever they go; and haven’t had so much as a sniffle through this entire ordeal.

It appears, in general (there’s always outliers) that the extent to which people are getting exposed, sick, or harassed is in direct proportion to that person’s beliefs and emotions. Those who are afraid are getting sick; and those who believe this is a total non-issue have miraculously remained well. But this is not simple psychosomatics. This is spiritual.

Have I not commanded you? Be strong and courageous! Do not be terrified nor dismayed, for the Lord your God is with you wherever you go.”
Joshua 1:9

What if something supernatural occurs behind the veil, in the spiritual realm, when we aren’t afraid? What if fearlessness is a weapon that utterly strips Satan of any-and-all power over us? What if we only become susceptible to dread, disease, and death when we hand those keys over to Satan through our fear? What if God’s incessant pleas for us to not fear are more than just little pep talks aimed at insecure believers with anxiety disorders? What if the “do not fear” verses are actually war tactics that instantaneously obliterates deception and foil the plans of our enemies?

I want to again reiterate a few things here.

(2) I know there are always outliers and exceptions to every rule, and

(3) this is all 100% speculation on my part based upon the commands of Scriptures and consistencies I’ve observed first-hand in my own life and in the real world dozens upon dozens of times over the course of this past year.

When human beings enter panic mode, their brains jam and they tend to make a succession of very knee-jerk, uninformed decisions that pile more and more unforeseen consequences upon their circumstance. Now, instead of being at an easily resolvable “1” – we have escalated to a 10, with most of the stress now being the result of, not the initial situation we encountered, but the fallout of all our subsequent decisions made within the context of our panic.

As Believers, we MUST slam on the breaks NOW and take time to test every spirit to see whether it is of God (1 John 4:1) before making life-altering or life-and-death decisions (such as blindly obeying unconstitutional laws or taking part in a global medical experiment).

It doesn’t matter what you have or have not done up to this moment. Slam on the breaks now, hit that reset button, go to God in prayer…immerse yourself in the Word of God, in history, in pathology…be “good Bereans” and examine the Scriptures daily to see whether these things are so (Acts 17:11). (How many Christians are substituting the word “Scriptures” in that verse with the word “internet”?)

I think a lot of believers are waiting for Armageddon. If and when the “end times” comes, then they’ll go get their slingshot and polish off five stones. But the fiercest weapons we have at our disposal right now are our minds and our mouths—and we need to be training with both of them daily. The spoken Word (Scripture, prayer, singing) can route the enemy and stop him dead in his tracks. And our minds—if we can keep them soaking in the juices of the Word of God, and in His promises, His deliverance, His faithfulness, and His provision—our minds will be purified from all fear.

Fear is the fuel that keeps Satan’s war machines going. If we starve him of his fuel, the turbines will grind to a pathetic halt. Our collective fear of (and compliance to) tyranny will only empower and embolden the enemy.

Many of us feel defeated. “I’m just one person, what can I do?” Do not underestimate the power of your fear. If every one of us, like Shadrach, Meshach, and Abednego, would simply resolve, “We will not bow!” we would become a vast army, millions strong, and our collective courage would starve the enemy of his power. Without our fear, Satan will be forced to once again, with tail tucked between his legs, retreat in shame off the world stage in utter humiliation and defeat.

COVID isn’t killing us…fear is. Take a daily dose of this biblical Ivermectin—Jeremiah 1:17–“Jeremiah, get ready. Stand up and tell them everything I command you to say. Don’t be afraid of the people, or I will give you good reason to be afraid of them.”