“Ms. Rivera confirmed that she has not been taking her prescribed medications over the past month,” police wrote in a probable cause statement after speaking with Marisa Rivera. “Ms. Rivera also stated that the medications make her feel ‘funny.’ She stated that she also hears voices that tell her to do things, and has felt in the past that the government was watching her.”

Friday a wellness check was called in for 56 year old Denise DeNapoli after she couldn't be reached by coworkers and failed to show up for work.  Her coworkers had reason for concern as one of them told police that DeNapoli had confided in her that she was "having problems with her daughter" and that her daughter wasn't taking her prescribed medication for her diagnosed schizophrenia.

Police located DeNapoli on the bathroom floor of the Ramblewood Village apartment she shared with her daughter.  They also located a knife in the kitchen sink and blood stained clothing in Rivera's bedroom.  An uncleared alert on DeNapoli's cell phone indicated that $200 was withdrawn from an ATM at 4:57 am.

Police interviewed some of the neighbors and they stated that they had heard screaming at 3:30 am, but none of them called the police. 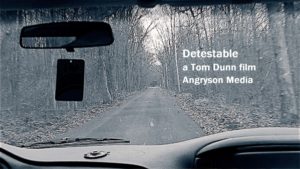 The neighbor that lives below Rivera and DeNapoli's apartment allegedly told authorities that she heard “loud screaming from two separate voices, which was followed by ‘raspy’ speech.”  Another neighbor reported the same loud screaming and stated that he started watching videos on the couch to try and get back to sleep.  He further reported hearing footsteps of someone leaving whom he presumed was the daughter.

Police traced Rivera to the Wyndham Hotel where she checked in at 5:45 am before taking a cab to Virtua Hospital emergency room in the afternoon for treatment of cuts on her hands.  While police were speaking with the front desk, Rivera returned from the hospital and agreed to go with police to the station.

“She first stated that she woke up in the Wyndham Hotel with blood on her hands, and some blood on her clothes,” police wrote in the probable cause statement.  Rivera is said to have told police that she didn't remember the events of the previous night,but at some point recalled that she had been watching television in the living room of the apartment while her mother slept in her bedroom.

She is being held at the Burlington County Jail on one charge of murder and weapons charges.  Her first court appearance was Saturday where a detention hearing was requested.  It is expected that the prosecutor will ask at Wednesday's hearing that Rivera be held for trial.