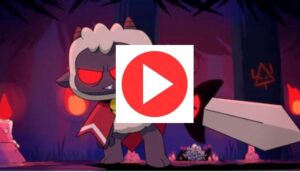 Let’s play a drinking game. Grab a bottle of Nyquil and every time you see a satanic or Illuminati symbol in the above video, take a swig. If you are still awake by the end of this 2-minute clip—you win a prize. (That prize being the loss of several brain cells).

Just to clarify—this is a video game. The game developer’s You Tube channel, DevolverDigital, has posted a trailer of the game entitled: Cult of the Lamb/Sacrifice Yourself in 2022. (If the video posted above does not work for you, click HERE).

The details in the description box read:

“Cult of the Lamb casts players in the role of a possessed lamb saved from annihilation by an ominous stranger and must repay their debt by building a loyal following in his name.

Start your own cult in a land of false prophets, venturing out into diverse and mysterious regions to build a loyal community of woodland worshippers and spread your Word to become the one true cult.

Collect and use resources to build new structures, perform dark rituals to appease the gods, and give sermons to reinforce the faith of your flock. Explore a sprawling, randomly generated world, fight off hordes of enemies and defeat rival cult leaders in order to absorb their power and assert your cult’s dominance.

Train your flock and embark on a quest to explore and discover the secrets of five mysterious regions. Cleanse the non-believers, spread enlightenment and perform mystical rituals on the journey to become the mighty lamb god.”

But don’t worry, if the You Tube reaction video community is any display of this game’s demographic, the game appears to only appeal to men pushing 40. So, at least for once, the kids are safe…maybe.