In 1993, two ten-year-old boys dominated headlines for a period of time after they abducted a two-year-old from a Liverpool shopping center.  After the abduction, the two boys tortured and killed James Bulger before tying his body to a train track in Merseyside, North-West England.

Both boys were convicted of murder and held until 2001 when, upon release, they were given tax-payer funded, new identities.  The other boy, Robert Thompson, hasn't been heard from since, but Jon Venables has been jailed twice since his release, once in 2010 and again in 2018, after admitting to possession of over 1,000 'sickening' images of child pornography as well as a paedophile manual.

Due to his new identities continually being exposed by an understandably upset public, earlier this year it was revealed that UK taxpayers have shelled out £65,000 ($125,642) in legal battles related to keeping Venables latest identity a secret.  As a result, talks are now underway of relocating Venables to another country.  At the top of the list is evidently Canada, with Australia and New Zealand rounding out the top three.

James Bulger's father, Ralph, 52, has stated that he will spend his life attempting to get the initial ruling made by Dame Elizabeth Butler-Sloss granting his son's killers life-long anonymity for "public safety."  High Court judges though, are concerned that should Venables' identity be exposed, it could lead to vigilante justice. 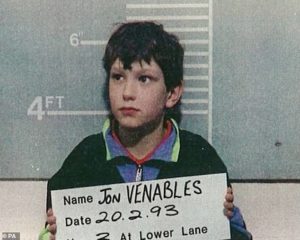