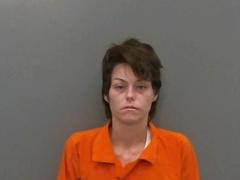 On July 21st, service was interrupted for those attending at Taylor Chapel located at 600 Griderfield-Ladd Road in Pine Bluff, Arkansas.

Brittany Snow-MCAfee is reported to have interrupted the service to tell the congregants that they were "all devil's children," and that "someone was going to die," because she was "there to take a soul."

After being asked to leave several times, she eventually made her way out to the parking lot to stand next to a pickup truck in the driveway with one of the female congregants that spoke with Pine Bluff police officer Vernita Burns once she arrived at the scene.

When Burns asked Snow-McAfee her name, she identified herself as "Jesus."  When asked to place her hands behind her back, she was handcuffed and taken into custody without incident.

According to the female congregant that spoke with Burns, the woman said she had called police because some members of the congregation were afraid of Snow-McAfee because she was talking about the devil.

Officers confirmed with Snow-McAfee that she was the one that had been driving the pickup and when they searched the vehicle, they located a glass pipe with burn marks.  A field test confirmed the presence of MDMA commonly known as 'ecstasy.'

Snow-McAfee was booked on drug charges but later got out of jail on a $5,000 bond.

Just four days later, however, Snow-McAfee was back in Police custody on more drug charges as well as a list of other charges including driving with a suspended license, aggravated assault, and fleeing the scene of an accident.

Author's note:  I have done what I can to represent just the facts of this story above, without allowing any of my own opinions to interfere.  But now, I feel something must be said:

If a woman entering a church merely speaking of the devil is enough to scare congregants, where is the faith, power, and authority that Jesus died on the cross to bestow us with so that we would be able to walk in the world as His ambassadors?  When faced with an opportunity to minister to a woman that clearly needs not only salvation but deliverance, they hid behind their walls and called the cops.

Do not take this the wrong way- I am not saying that calling the cops is never the right answer, there are absolutely times when that must be done and swiftly.  But there are also times when lost and hurting people show up to a church in a state that is not deemed acceptable to the congregants in need of help that supposedly, only the church has.  Let's not miss those opportunities.