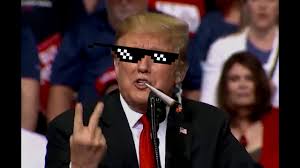 President Donald Trump recently came under harsh criticism for calling the rioters in Minneapolis, thugs. Twitter censored the president’s tweet, and all sorts of political and celebrity riffraff came out of COVID hiding to hiss all sorts of opprobrium through the mesh of their mandatory masks.

First, let’s break it down. What exactly does thug even mean?

According to Dictionary.com, it refers to a cruel or vicious ruffian, robber, or murderer. A ruffian is a lawless person or a bully. So, Trump basically called the looters (the looters, not the peaceful protestors) guys who were breaking the law and stealing stuff.

Okay, so, I’m clear on what thug means. I’m still unclear on why Twitter thinks calling thugs, thugs, is “glorifying violence.” CNN, still apparently ignorant that the U.S. Military exists to defend the country from terrorists—both foreign and domestic—apparently believe that Trump calling on the military to take swift action and put an end to the domestic terrorism running rampant on the streets of Minneapolis, is somehow synonymous with inciting and glorifying violence.

Interestingly, a mere five years ago, former president Barak Obama also brandished the T-word to describe a nearly identical incident as the one we saw play out last week in Minneapolis—riots in Baltimore that resulted after an act of police brutality.

USA Today reported on the incident in 2015:

“Whether it’s arson or, you know, the looting of a liquor store … those were thuggish acts,” Earnest said.

In discussing the riots Tuesday, Obama assailed the “criminals and thugs who tore up the place,” and described them as a distraction from the real issues of police brutality.

The vast majority of the protesters of a recent police killing acted in a law-abiding way, Earnest said.

“At the same time, we saw a small minority of individuals engaged in other activity that was not responsible that is clearly a crime,” Earnest said.

He added: “And when you’re looting up a convenience store or you’re throwing a cinder block at a police officer, you’re engaging in thuggish behavior and that’s why the President used that word.”

The good news is, BOTH presidents received backlash, not just one. Both presidents stood by their choice of words, not just one. The difference is, Obama was respected for his confidence and bravado, while Trump is made out to look like a child being chastised by his mommy for saying a “naughty word.”

Take it from an English major, there is no indication of race, creed, age, or gender secretly embedded into the word thug. If you set people’s businesses on fire, loot Targets, throw bricks at cops, and set their squad cars on fire, then whether you’re as purple as Grimace or as green as Gumby, face it Twitter, they’re a thug.

Twitter was on fire in December 2018 criticizing Melania Trump for sporting a pair of Timberland boots while visiting the troops in Iraq with her husband, President Trump. See the story here as reported by Yahoo! Life.

Contrast this with Brian Sozzi’s September 2020 article for Yahoo! Finance entitled, “Kamala Harris May Have Made Timberland Boots Cool Again.” An article in which the Democratic VP candidate is praised for wearing the same pair of boots that the press criticized Melania for wearing just 2 years prior.

If you liked this article, click here to read C’mon, Man!