Ever wonder why there are so many cities, roads, highways, bridges, and rock formations named in honor of the devil? After a rather bizarre personal experience in my teens at Devil’s Tower, I began to wonder which came first—the chicken or the egg? Were these places conduits of the paranormal because of their very names…or did the settlers who coined these names know something we don’t?

Devil’s Tower was in the spotlight back in 1977 upon the release of Stephen Spielberg’s now cult classic film, Close Encounters of the Third Kind. The polyphonic five tones featured in the film were simulated on more 1980s synthesizers than Chopsticks or that catchy little Van Halen Jump riff. The film set off a veritable three-decade long lore-gasm for ufologists flocking to the site in droves to see if life would be willing to imitate Spielberg’s art. Eventually the hot spot (literally) took a back burner and once again became nothing more than a novelty tourist attraction, only to be back in the conspiratorial limelight thanks to recent You Tube videos speculating that the strange basalt rock formation is actually an oversized, petrified tree stump.

Nowadays, the place can be seen crawling with secret service black Chevy Suburbans (nothing here to see!), but back in the 80s, you could pitch a tent right at the foot of the thing, and that’s what my family was doing one fateful (excruciatingly hot) summer night in 1989. I awoke in a sleep paralysis state hearing muffled voices. There were shadows moving in circles around our tent. Upon the second or third pass, I heard a voice say, “…or we could just shoot them all in their sleep.” Terror arose in me. I couldn’t move. I glanced sideways, my dad was in a deep sleep, oblivious to the scene unfolding outside the tent. I was terrified and began to plead with Jesus to protect us. The next thing I knew, the sun is coming in through the tent windows. It was morning and we were all alive, so I chalked it off to a bad dream brought on by the terrible heat. About 20 years later, I said to my mom, “Remember that time we camped at Devil’s Tower?” Then I said, “Man, I had a nightmare that night.” My mom’s face turned white as a sheet. Then she said, “Was it about a bunch of guys were circling our tent thinking about shooting us?” Needless to say, it was quite alarming to realize that it wasn’t a dream and perhaps, save my mom and my silent, frantic prayers that night, my whole family might have wound up on an episode of Forensic Files.

It seems that Devil’s Tower might indeed by aptly named. But this looming laccolithic might not be the only place the First Nations and early American settlers deemed worthy of a “devil” moniker. Let’s explore a few of the 2,635 places[1] in the U.S. named after the devil.

This eye of Sauron looking architectural masterpiece pictured below is named Rakotzbrücke (aka Devil’s Bridge). Rakotzbrücke is located in Germany, but it is only one of many Devil’s Bridges in Europe. Other bridges are located in France, Bulgaria, Estonia, Romania, United Kingdom, Switzerland, Spain, Slovenia, and Italy. Granted, Rakotzbrücke is by far the most dramatic and visually stunning. It is believed that the town’s knight commissioned the bridge in 1860 and it was constructed using basalt columns which were shipped in from different quarries.

Interestingly, Devil’s Tower is made of basalt as well. Basalt is an extrusive igneous rock that is formed when lava rapidly cools in temperature. Volcanos—an image of erupting fire—is certainly tantamount to hell and what one would envision the devil’s lair to look like. 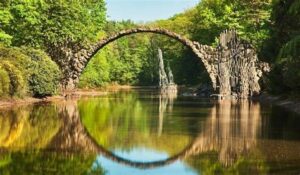 According to World Atlas.com, “There are numerous mystical narratives related to the bridge, including one that claims you can discover the mystical powers within yourself if you sail under the bridge on the night of the full moon. Some believe you can see the Devil’s face if you look sideways, while others believe that the Devil’s Bridge is a portal to another world.” 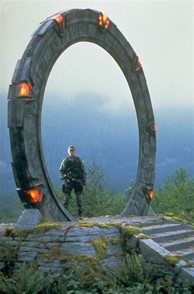 Replica of Stargate from the films 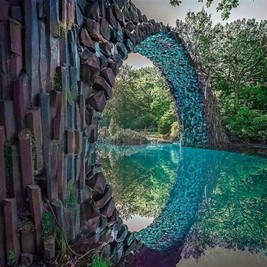 Another angle of Devil’s Bridge in Germany

The bridge also comes equipped with a Robert Johnson-esque “Crossroads” legendarium. Some say the builder sold his soul to the devil, sacrificing himself once the bridge was built; with other renditions being he builder wagered with the devil that in exchange for assistance with its construction, the devil could have the soul of the first person to cross the bridge. But the devil was ultimately foiled when the builder sent a dog across the bridge upon completion.

Jonathan Hull took the trouble of designing a U.S. map complete with every location named after the devil or derivatives thereof (Diablo, Satan, hell, etc.) His locations include Hell’s Kitchen, N.Y., the Devil’s Lakes, Route 666 in the Southwest, and the quaint little border town of Beelzebub, Utah.

Loren Coleman’s website cryptozoonews.com has an excellent post entitled, “Devil Names, Fortean Places, and Cryptids” which begins, “When Western Europeans landed in the New world and began spreading across what was later to become American, they discovered what the Amerindians already knew…there were some strange places in this new land. Certain locations were “strange” because the early explorers and settlers would see, hear, smell, or feel strange things—weird globes of light, eerie screechings, sickening sweet odors, cold drafts of air as well as unknown aerial phenomena, mystery animals and other “inexplicables.” The interface between these newcomers and the decidedly unexplainable phenomena produced place names that attempted to reflect the notion that the locals were special, different, and indeed, strange.”

Coleman doesn’t simply detail the names and places, but also the rather strange appearances of cyrtids, orbs of light, mystery creatures, UFOs and the like that are consistently sited at these locations.

In regard to “Devil’s Bake Oven” in southern Illinois, folklorist John W. Allen writes, “On those nights when the hill was flooded with gentle moonlight, visitors would report that they had seen a weird and mist-like creature…floating silently across their pathway to disappear among the rocks or in the dense bushes on the hillside. This disappearance was often followed by moans, wails and shrieks such as only a ghost can make.”

Many are familiar with “Devil’s Pass” in the Ural Mountains of Russia, now coined the “Dyatlov Pass Incident” where a small group of graduate students were all found dead in a manner that still has crime scene investigators scratching their heads. Their hike began en route to Mount Otorten, which translates, “Don’t go there.” The remains of the deceased students were later located at Mount Kholat Syakhl, which translates, “The mountain of death.”

Coleman also sites that the native Algonquin word for devil is “Hockomock” and there are at least ten U.S. locations named Hockomock. Six in Maine, two in Massachusetts, one in New Jersey (Hockamik), and Hockamin Creek in Minnesota. One of the Massachusetts locations—Hockamock Swamp in the Bridgewater Triangle is, “a place where people vanish and creatures like giant snakes, Bigfoot, Thunderbirds, and phantom panthers are seen.”

Another interesting factoid is that there appears to be a preponderance of devil/hell names particularly found in U.S. national forests (another topic of recent conspiracy due to the popularity of David Paulides’ Missing 411 book series).

Here is a truncated list of our national forest’s devilish cognomina:[2]

Indeed, this topic is a fascinating etymological, historical, and cultural area of untapped research.

Yet is there something to fancy dear
In this silent cave and its lingering fear,
Something which tells of another age,
Of the wizard’s wand, and the Sybil’s page,
Of the fairy ring and the haunted glen,
And the restless phantoms of murdered men:
The grandame’s tale, and the nurse’s song
The dreams of childhood remembered long;
And I love even now to list the tale
Of the Demon’s Cave, and its haunted vale.

[1] Stat is provided by Henry Franzoni, a researcher living in the Pacific Northwest with a remarkable names database. As of 1998, he had found 2,635 places named (or which were named) Devil, Diablo, or Diabla in the United States.

[2] List and accompanying article can be found on nationalparkstraveler.org