“The message to missing children and their families is that we will never stop looking for you," U.S. Marshals Service Director Donald Washington said in a statement.  “One missing child is worth thousands, in my mind, of fugitives that we go out and get.”

"Operation Not Forgotten" spanned 20 counties in northern and central Georgia and was a joint operation between the U.S. Marshals Fugitive Hunters and seven other agencies which took place over two weeks in August.  The goal of that operation was the recovery of missing and exploited children. 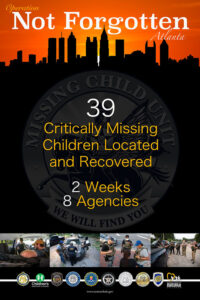 "Operation Not Forgotten" resulted in the rescue of 26 children, the safe location of 13 children and the arrest of nine criminal associates.  The ages of the children ranged between 3 and 17 years of age, and they had been missing anywhere from a couple of weeks to two years.

“These missing children were considered to be some of the most at-risk and challenging recovery cases in the area, based on indications of high-risk factors such as victimization of child sex trafficking, child exploitation, sexual abuse, physical abuse, and medical or mental health conditions,” authorities said. “Other children were located at the request of law enforcement to ensure their wellbeing.”

According to WUPA 15 of the children recovered were known to have been sex trafficked.

According to FBI statistics cited by Washington, a child is abducted ever 40 seconds within the United States and there are currently 421,000 children missing.  91% of those missing are considered "endangered runaways."

Washington went on to say “Here in Atlanta, approximately 300 young girls are lured into sex trafficking every month.”

“To address [sex trafficking], it requires agents, foot soldiers and prosecutors that are willing to take the fight to the enemy,” said Georgia Bureau of Investigation Assistant Director John Melvin.

“When we track down fugitives, it’s a good feeling to know that we're putting the bad guy behind bars. But that sense of accomplishment is nothing compared to finding a missing child," said Darby Kirby, Chief of the Missing Child Unit was quoted as saying. “It's hard to put into words what we feel when we rescue a missing child, but I can tell you that this operation has impacted every single one of us out here. We are working to protect them and get them the help they need.”

WSB-TV reports that other major cities across the country are in the midst of similar operations which have not yet completed.

Those arrested are as follows: