October was a busy month for the Polk County Sheriff's Office, which the Orlando Sentinel quoted Sheriff Grady Judd as saying it was the busiest on record with 31 arrests.

The office ran two separate sting operations during the course of the month, one focused on previously unknown predators, and one on those that had already been convicted.

Operation Trick or Treat focused on verifying that those living in the county who had been previously convicted as sex offenders were obeying the requirements placed upon them to register and with any terms of their probation.

“We know our citizens are concerned about predators and offenders being around children during events such as Halloween, so every year we conduct initiatives like this one,” Sheriff Judd said.

Fourteen men were arrested for being in violation of registration requirements or the terms of their probation and face a total of 49 charges between them. 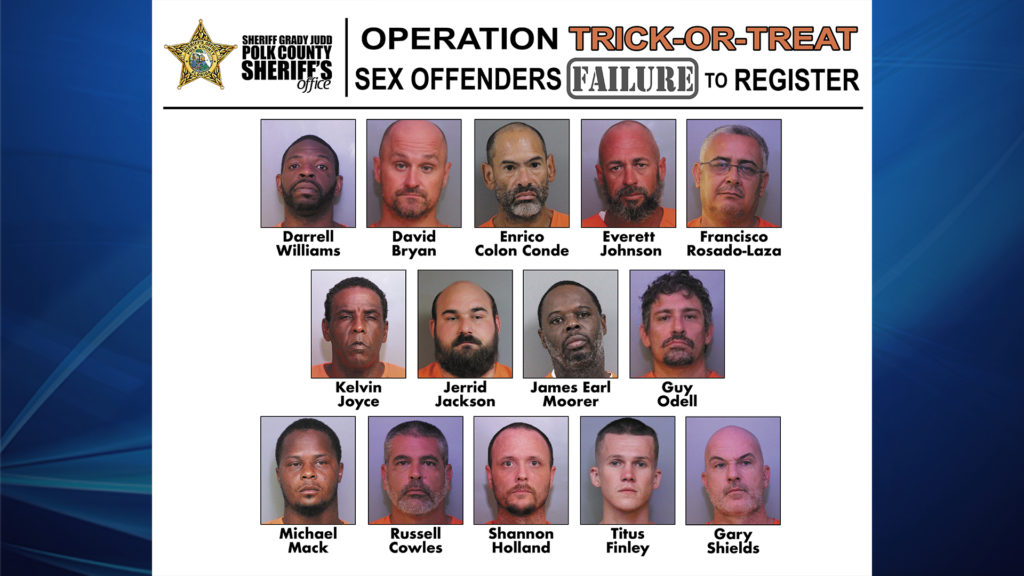 There are a total of 626 current charges between those seventeen men, 624 of which are felonies, 2 are misdemeanors.  More charges are likely to be forthcoming as their electronic devices are undergoing forensic evaluation.

“The people arrested during this operation prey on the most innocent and vulnerable among us---our children," Sheiff Judd said.  "The undercover detectives who investigate these crimes have to see things that nobody should have to see, and no child should have to experience. Each one of these arrests has removed a predator from our streets, and the internet.”

According to the press release from the Polk County Sheriff's Office, 252 of those charges are credited to one individual; the former middle school assistant principle, 76 year old William Hague.  "He had hundreds of videos and images of child pornography, with girls of various ages, one as young as 8-12 months old," and when the executed the search warrant on his home, he was engaged in a conversation with someone online seeking images of a 15 year old girl.

Another individual, 20 year old Christopher Drennen allegedly sought assistance from a friend in removing images of children from his computer.  The friend discovered images she felt were inappropriate, including one of a girl that may have been as young as 3-6 months old, and presumably, contacted the authorities.

Officers interviewed Drennen at the Polk County Jail where he was being held on unrelated charges and is said to have  "admitted that if he did not view child pornography, he would sexually batter a child in real life."

Donald Durr Jr., 52, a custodial worker for Disney described himself to officers as “a pervert, but not a monster.”  He was found to have explicit material of a girl between 5 and 7 years old and is now facing nine felony charges.