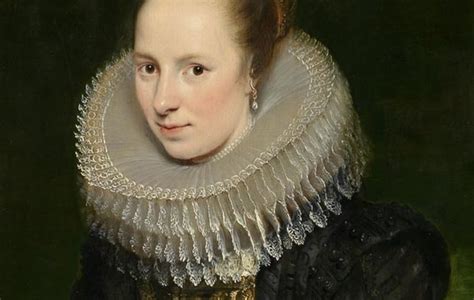 Calling all phantasmic fashionistas! Due to the unprecedented reception of my Panda Face article last year, I decided to roll out a weekly article series outlining some of the “innocent” fashion trends—past and present—that were perhaps (quite literally) designed to hide (in plain sight) the sinister underbelly of the elite underworld.

The antiquated fashion trend we will be exploring in this first edition of “Nefarious Fashion Trends,” is the 16th-century collar ruff. According to, “Fashion: The Definitive History of Costume and Style,” ruffes are simply, “a detachable pleated collar in linen and/or lace starched into shape and sometimes supported underneath.” These ruffes started off as an understated collar adornment, but as the trend gained traction amongst the wealthy, and with the invention of starch, the ruffes became larger and larger as the decades wore on.

Because the ruffes were eventually fashioned out of lace (a relatively new and fairly expensive fabric in the 1500s), it goes without saying that the primary niche market purchasing these ruffes were predominantly people of high social standing and wealth, including but not limited to the royal families.

Much like today’s edgy fashion trends, the religious establishment of the times openly despised and publicly denounced these ostentatious eye sores. The Puritans, in particular, were appalled by the elite’s gaudy, oversized hats (referred to as “enormous showpieces”), immodest slashed sleeves, and their protuberate collar ruffes. These adornments were often embellished with needlessly expensive textiles such as silver, gold, and lace. Such elaborate ensembles were designed to not only show off and flatter the form of the wearer, but to show off and flatter their excessive wealth as well.

Contemporary Puritan commentator, Phillip Stubbes, speaking on behalf of 16th-century Puritans whose, “moral framework had no place for pride or vanity,” explains that the religious establishment of this era often slandered the disproportionate size of these starched ruffes as, “great and monstrous.” The Puritans who, despite modern stereotypes, did not exclusively wear black, but in fact wore a spectrum of brightly-colored clothing, simply found the fashion trends of high society to be wasteful and immodest. The Puritans took their modest, minimalistic lifestyle so seriously that they enforced it in a court of law where malfeasants were required to pay anywhere from 10 shillings to a £200 fine! This would amount to roughly $107K in American dollars today—astonishing evidence of just how seriously the Puritans took their dress code.

By the early 17th-century, lace, wire, and starch created the perfect fashion trifecta—allowing the ruffes to balloon into preposterous proportions, with some reaching the actual size of an upper millstone. Thus, the millstone ruff was born.

Since the beginning of time, the upper echelons of society have pompously pursued the dernier cri, pushing the boundaries of fashion further and further over the very edge of propriety. To this day, the haute couture runways of New York’s famous “Fashion Week” feature entire collections of absurdly unwearable costumes, suitable for a runway show, but utterly worthless for any woman intending to drive a car, use the restroom, or heaven forbid, sit down in a chair!

Alas, there is truly nothing new under the sun; because these high-falutin fashion trends were every bit as prevalent in the 16th-and-17th-centuries as they are today. But how could these millstone ruffes, despite being even less visually appealing than Lady Gaga’s maggot-attracting “meat dress,” be considered nefarious?

Well, perhaps the key is in its very name. One can hardly see the word millstone and not call to mind Luke 17:1-2, “Jesus said to His disciples, ‘It is inevitable that stumbling blocks will come, but woe to the one through whom they come! It would be better for him to have a millstone hung around his neck and to be thrown into the sea than to cause one of these little ones to stumble.’”

So, here is where we begin to meander into the realms of speculation. Due to high level whistleblowers and the current disclosure timeline, we now know some of the “useless deeds of darkness” that the wicked do in secret (as alluded to in Ephesians 5:11-12). And we have also discovered that many of the seemingly random fashion trends being peddled by Hollywood, advertising firms, and fashion designers are very well thought out “truth-in-plain-sight” hat tips to the sinister underbelly of our elite society.

Take for example the influx of owl textiles and jewelry that flooded the scene around circa 2012, and their occult connection to the secret society owl gods (such as the one lording over the Bohemian Grove where the elite gather to “play”).

Or, as I laid out in my Panda Face article, the 2011 failed fashion trend of “panda eyes”—an extreme take on the “smoky eye” black eyeliner look. Shortly after media launched the panda eyes trend, SRA survivors came forward and revealed that young victims of sexual abuse develop ringed bruising around their eyes due to burst capillaries, the physiological result of being brutally sodomized.

These are just two of the seemingly innocuous fashion trends being pedaled to the masses that are nothing short of a truth-in-plain-sight mockery of the wickedness that keeps the bored elites of this world entertained.

This abuse has been going on for centuries. One need only casually glance through the Old Testament to see the many references to child sacrifice and Molech worship that was rife upon the antidiluvian and the post-flood earth. And the very context of the passage in Luke 17 plainly shows us Jesus’ utter disgust for people in positions of power who use their authority to destroy the hearts, minds, and lives of innocent children.

Of all of the metaphors Jesus could have come up with to describe a punishment worthy of these types of crimes, He chooses one that conjures up a mental image of these abusers with giant millstones hanging around their neck. 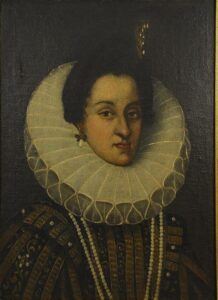 Because these elitists, occultists, and Freemasons are so proud of their arcane knowledge and their sex magick rituals, they love to flaunt what they are doing right in front of our faces. It is likely no accident that the millstone ruffes were despised by the religious class, while proudly worn by members of the elite royal families who, to this day, still practice these twisted rituals—rituals designed to accomplish the very thing Jesus reserved the millstone judgment for, namely, causing little ones to stumble.

So, is it so difficult to believe that these unflattering, impractical, and no doubt very stifling and uncomfortable ruffes were nothing short of a secret society snub? A truth-in-plain-sight fashion trend brazenly worn by incognito child molesters brandishing their symbolic millstones with haughty pride? A bold (fashion) statement of rebellion delivered directly to the Son of God, stating that they not only accept their millstones, but in fact wear them with pride?

I hope you enjoyed this first installment of Nefarious Fashion Trends. In our next installment, we will discuss the Most Noble Order of the Garter ceremony, established in 1348 by King Edward III. This annual celebration continues to this day with a most interesting tradition of the royals sporting elaborate hats with large black or white plumage. Are these feathers a fashion statement, or are they a nefarious fashion trend? Tune in next week to find out….