Continuing the series, Nefarious Fashion Trends, we turn from footwear to hairstyles. This is some pretty low-lying fruit, as one can tell simply by looking at a photo what the famous “beehive” hairdo was all about. 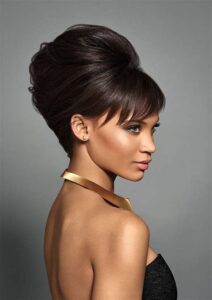 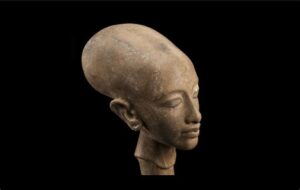 The beehive, which was all the rage in the 1960s has made a comeback, and today, as well as yesteryear, the ‘do was primarily popularized due to the preponderance of celebrities who embraced the trend.

Now, I am not saying that the designer behind this hair trend (or even the celebrities for that matter) knowingly created or sported this style in hopes to look like Nephilim. What I am suggesting is that this hairstyle was considered fashionable due to a millennia-old belief that elongated skulls are considered beautiful, or better said, associated with wealth, power, and royalty. 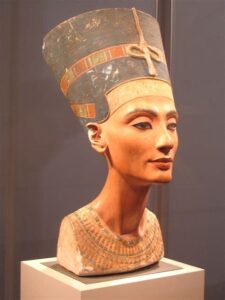 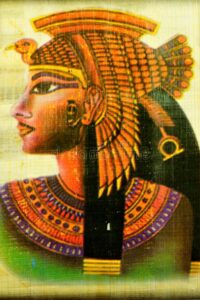 The beehive style was first introduced to modernity by Chicago-based celebrity hairstylist, Margaret Vinci Heldt. She was in the business for a decade before stumbling upon the now-iconic ‘do. She developed the style for Modern Beauty Shop magazine (now known as Modern Salon) in 1960.

“They called me and they said, ‘Margaret, hairstyling has gone dead, there’s nothing exciting. We have the pageboy, the flip, the upsweep like the French twist, but nothing is happening around the top of the head.’ … ‘I’ll get out of the box and see what I can do.’”

The rest is history, as they say.

Interestingly, the editors at Modern Beauty Shop magazine were hitting the nail right on the head when they described the ‘do as a, “tall, wraparound crown.” Indeed.

Heldt might not have known what she was emulating, but it is quite possible that the icons of the 60’s, such as Audrey Hepburn, Bridgitte Bardot, and Barbara Streisand did. The elite A-list Hollywood folk know their roots. They don’t get to walk down that red carpet for no reason at all. They come from “royal” bloodlines, and they know it. They know their history and where they came from. And as we all pretty much now know, east coast or west—most of these celebrities are blood related.

Take for example this February 24, 2020 article from Marie Claire magazine, “35 Celebrities You Never Knew Were Royal.”

“Some actors and actresses have had such monumental and legendary careers that, in a way, these Hollywood stars are a form of royalty on their own. But even though they may feel like kings and queens to us commoners, a surprising number of our favorite celebrities actually have direct connections to monarchies through their bloodline.”

Geneologists have determined that 32nd U.S. President, Franklin Delano Roosevelt was distantly related to 11 other U.S. Presidents. In fact, according to an article featured on the website deando.com,

“If anyone is still out there who thinks “elections” are how the presidents get put into office… please explain how all 44 U. S. presidents (some research will say with the exception of only one- Martin Van Buren) are all related. According to Burke’s Peerage, all 44 U. S. Presidents have carried European royal bloodlines into office- thereby all 44 being related.

34 of the 44 previous presidents have been direct genetic descendants from just one person, Charlemagne- the brutal eighth century King of the Franks and 19 of them directly descended from King Edward III of England. In fact, the presidential candidate with the most royal genes has won every single American election.”

“Gary Wayne gives us insight on Bloodlines of the Royals, especially the Stuarts (Stewarts) and Windsors. Gary traces the origins of the royal families and how they became powerful monarchs. Answers of where their bloodlines come from, what makes them unique, and what their role is in society and in relationship with the Secret Societies and their agenda.

Gary takes us through the early Saxon and Viking period where the Royal families came, on to King Arthur. He shows how the Sinclair Knights Templar family merged with Robert the Bruce to become the Stuart (Stewart) family that gave us King James. Also, how the Hanover family line also parallel and had become the Windsors.

Gary also shares how the Royal bloodlines keep track of their lineage and have used outside bloodlines to prevent inbreeding (incest} issues, but that they intend to return in purity in the End Times. We trace them to possibilities of Antichrist and how they intend to use kings to divide the regions of the world into 10 sectors.”

These elite bloodlines are very proud of their heritage. That’s one reason they go so far out of their way to intentionally mimic their ancestors in their clothing, makeup, jewelry, and hairstyle choices. And, this is speculation on my part, but this also might be why Peter warned women in 1 Peter 3 to not overly adorn the external body with braids and silver and gold. Most likely, these were the popular styles of the pagan nations of the day, and Peter was warning women to not emulate the styles of godless women, because their style choices were tied into their gods and goddesses and rituals and traditions, and we are to be set apart.

It is no different today. Yes, we no longer attend churches with strict puritanical dress codes and penalties for violation of them, and that’s a good thing. But, as women of God, despite our freedom to wear whatever we want, we should ultimately want to not emulate the godless things of this world or unwittingly bear the image of false gods or demonic entities.