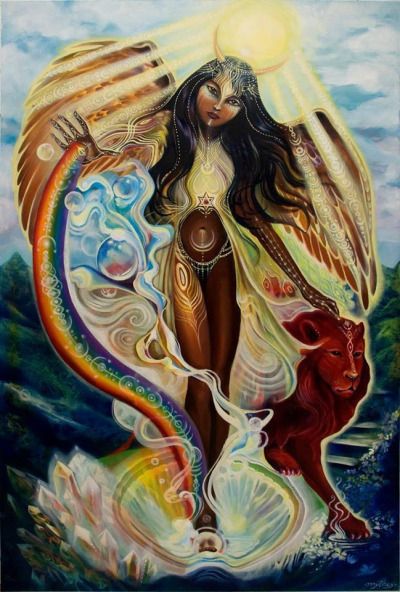 Inanna was an ancient sky goddess of sex and war. She was worshipped by many nations and was given many names. To the Mesopotamians, she was Ishtar; to the Sumerians, she was Inanna; the Greeks knew her as Aphrodite. Inanna, with her many offshoots and counterparts, also went by the names Astarte, Venus, Nanna, Anat, Isis, Astghik, Hera, Juno, Easter, the bride of Tammuz, the bride of the shepherd boy, and the Queen of Heaven.

There is also historical documentation indicating that the “Heavenly Aphrodite” was known to pre-Islamic Arabians as the goddess Al-Lat; whose counterpart within the ancient Western Semitic nations was the goddess, Asherah. According to Herodotus, the ancient Arabians only believed in two gods:

“They believe in no other gods except Dionysus and the Heavenly Aphrodite; and they say that they wear their hair as Dionysus does his, cutting it round the head and shaving the temples. They call Dionysus, Orotalt; and Aphrodite, Alilat.”

There are numerous references to Aphrodite, Queen of Heaven, in the Bible, as she was a prominent goddess worshipped by many of the gentile nations—and a perpetual snare to the Israelites; as well as New Testament converts who continuously attempted to synchronize the Gospel with their own gods and religious traditions.

This article intends to focus in on one of those aforementioned New Testament churches—the church at Corinth—to substantiate that the Apostle Paul preached the Gospel to pilipilis and kurgarras —predecessors of our modern-day transgenders.

Paul, in his first letter to the Corinthians said, “Or do you not know that your body is a temple of the Holy Spirit who is in you, whom you have from God, and that you are not your own? For you have been bought with a price: therefore, glorify God in your body. (1 Corinthians 6:19-20).

Paul was a Gospel-wielding theological wizard of words—the Guru of Grammar, the Leviathan of Logic–why is he on some rabbit trail here talking to the converts in Corinth about their bodies?

In Paul’s day, the port city of Corinth, Greece was the “Amsterdam of Antiquity,” and the Temple of Aphrodite that took center stage was a veritable red-light district, tourist trap rife with prostitution—and a very unique kind of prostitution at that.

As was stated earlier, Aphrodite was a Greek goddess, but her persona was synonymous with the Sumerian goddess of love and war, Inanna (aka Ishtar—the Akkadian iteration).

The entry for Inanna-Ishtar on encyclopedia.com states:

The goddess in Mesopotamia who embodied sexuality in all its aspects was known as Inanna (in the Sumerian language) and Ishtar (in the Akkadian language). Inanna/Ishtar was the manifestation of sex and eroticism—bride of brides, solace of married women, and patron of prostitutes.

The worship of Aphrodite in the city of Corinth centered around sex. Surviving historical documents such as Enki and the World Order, “Inanna and the Huluppu Tree” (found in the preamble to the Epic of Gilgamesh), the Sumerian hymn “Inanna and Utu”, and “Inanna Prefers the Farmer” all document Inanna’s rise to power and her insatiable thirst for sex, power, and war.

Now here is where it starts to get interesting. For any of you who believe the concept of gender fluidity is a recent invention, think again. Encyclopedia.com explains:

The sexual identity of this goddess is controversial. In one late text, Ishtar says of herself: “I am a woman, I am a man.” Ishtar could be viewed as a beautiful goddess of love who rules the day and as a bearded god(dess) of war who rules the night. It is claimed that the androgyny of Inanna/Ishtar provided a powerful symbol of the ambiguities of pure sexuality reflected in her cult, and in the transvestism of her cultic personnel (Groneberg 1986).

Furthermore, R.S. Benedict, in his article entitled, “How a Sumerian Goddess Turned Gender on its Head” writes:

Benedict also explains that temples dedicated to the worship of Inanna had a special kind of priest, called a gala, whose primary duties were to sing laments and perform homosexual sex acts.

While worshippers of Inanna/Aphrodite would not be familiar with our modern term transgender, they would be familiar with the concept. Aphrodite’s entourage of cult prostitutes consisted of castrated males (referred to as the kurgarra); and the pilipili (meaning “turned” or “transformed”) who were females, “raised as a woman, but possessing the spirit of a man.”

During the days that Paul lived, people who worshipped Aphrodite held an annual festival in her honor called Aphrodisia. It was held during the month of Hekatombaion—which on the Gregorian calendar would roughly fall around the third week in July to the third week in August. Textual sources explicitly mention annual Aphrodisia festivals taking place in the city of Corinth.

But then—this is key—instead of descending into a “fire and brimstone” sermon about sex being gross or God hating homosexuals, Paul lifted the Corinthians to the heights of their new-found salvation. He reminded them that they were bought with a price. This is another way of telling them that, in the eyes of God (unlike the eyes of the goddess Aphrodite) they had VALUE!

God loved them so much that he sent his own Son to die in order to rescue them from the enslavement of their non-binary, pan-sexual goddess who demanded worship via the mandatory mutilation of their bodies.

Paul probably went to his grave not knowing anything about gender blockers or sex change operations, but his words to the Corinthians ring every bit as true today as they did when he originally penned them. And we, like Paul, have been called to preach this same Gospel to our modern-day pilipilis and kurgarras.

Speaking once again to the church at Corinth, Paul warns the Corinthians to “flee from idolatry” (1 Corinthians 10:14). After several verses referring simply to “idols,” Paul’s language shifts from vague to specific when he clarifies that these “idols” are not mere statues or graven images but, demons.

No, but the sacrifices of pagans are offered to demons, not to God, and I do not want you to be participants with demons. You cannot drink the cup of the Lord and the cup of demons too; you cannot have a part in both the Lord’s table and the table of demons.

Paul is point-blank telling the Corinthians that they cannot synchronize the Gospel of Jesus Christ with Aphrodite worship because Aphrodite is not some mere mythological goddess or a statue carved out of wood or stone—she is a living, breathing demon.

Which begs the question—where is Aphrodite now? Do demons grow old and die? Do they retire at age 65 and move into a condo on a golf course in Arizona? Where did all these Old and New Testament “idols” go?

Maybe Aphrodite is alive and well—maybe she’s in your child’s primary school. Or in your local public library reading stories to your five-year-old while dressed in drag. Maybe she’s dressed up like your favorite celebrity or pop singer getting interviewed by Ellen on primetime TV. Maybe she’s at the 2014 British Comic Awards receiving a trophy for Best Comic of the Year for her “The Wicked + The Divine” comic book series. Maybe she’s volunteering at your local Planned Parenthood facility handing gender blockers out to your eight-year old. Maybe she’s in your church preaching a sermon about how God is okay with “anything goes” sexuality because homosexuals were “born that way.”

There is indeed nothing new under the sun (Ecclesiastes 1:9). And just like Aphrodite’s transgender temple prostitutes of old, so have we been BOUGHT WITH A PRICE, and part of preaching the “full counsel of God” to this modern, sex-centered generation, will be reminding people that their bodies are NOT their own.

Our bodies are not carnal fodder to be thrown at the feet of a demon in the temple of Aphrodite—they are temples of the Spirit of the living God to be used for His glory as instruments, not of prostitution, but of praise.

The Church today, like the church at Corinth, is unwittingly (and perhaps wittingly) synchronizing ancient sky-goddess worship with the Gospel of Jesus Christ. Believers need to be vigilant, alert, and sober minded. We must be able to detect the faces of these ancient gods and demigods lurking behind the masks of modern-day Christianity and we must unmask them with the same bravado as that prepubescent little shepherd boy, who RAN towards Goliath after defiantly declaring, “Who is this uncircumcised Philistine, that he should defy the armies of the living God?!”

It’s time to pick out five stones, Church. Not to aim at the victims caught within the LGBTQ net, but to rescue them by running towards the demonic stranglehold of Inanna which holds them in her grip.

The spirit of Inanna has permeated our culture.

Special thanks to Sharon Gilbert for her research and messages on Inanna, Queen of Heaven. Her work has been used by God as a floodlight upon the dark veil of the overly-contrived LGBTQ agenda being foisted upon our generation. I pray the light provided by her research will lead many who are lost into the arms of the Light of the World.