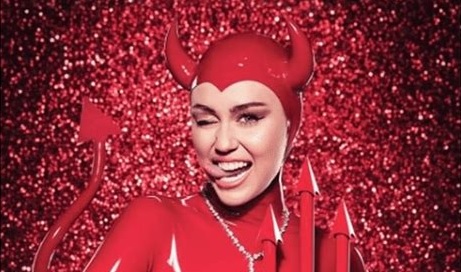 In 2018, the Soros-funded site, snopes.com, rushed to Miley Cyrus’ aid, assuring the public that Miley, in fact, did NOT sing the praises of Satan, debunking the much-published quote:

Miley Cyrus left her followers shocked and confused after advising her young fans to “worship Satan” if they want to become “rich & famous” like their heroes. The former Hannah Montana star left a group of fans bewildered after passing on the “pearls of wisdom” when asked for tips on how to gain success in the entertainment industry.

Following filming the NBC TV talent show, The Voice, on which Cyrus is one of the judges, a flock of young admirers had gathered outside the backstage exit, hoping to catch a glimpse of their idol. As the Wrecking Ball singer made her way out of the exit with her security team, one of her star-struck fans asked her: “Hey Miley, do you have any advice for any of your fans that might want to follow in your footsteps and become a star?”

To which she responded: “Yeah: If you wanna be famous, and rich, it’s easy… “But don’t ask me, you need to ask Satan. “You can have it all.” As a nervous laugh spread through the crowd, Cyrus stopped her bodyguards, seemingly annoyed by the response, and turned back to the crowd saying: “You think I’m joking?”

You asked me how to make it as a pop star and I just told you everything you need to do. “If you want everything that I have, then all you have to do is ask Satan for it and you can have it. “You need to stop asking Santa for Christmas presents and praying to Jesus because none of them exist. “Satan is our Lord, and when you let him into your heart and worship him instead of your make-believe God, then you can have it all.”

The article made its way around the blogosphere a year before Snopes called attention to it in December of 2018—with the original article, written by Neon Nettle, in December of 2017. Nettle, who has been chalked off as nothing more than a “conspiracy buff” was also responsible for publishing another article (also in December of 2017) where former child star, Macauley Culkin, claimed Hollywood was run by “Satanic pedophiles” and exposed a Hollywood director by name, claiming his shoes were made of the skin of a deceased child actor. But, lo and behold, because both articles were immediately deleted, this can only mean both stories were false.

Fast forward to 2020…a little article appearing in TopTrendsNig.com, an entertainment site that highlights trending topics, printed an article written by Ome Chukwuemeka, in which Miley is quoted as saying, “Satan is a nice guy, he’s misunderstood.” In a radio interview in Sweden, Miley stated,

She also claims that Satan provides her with guidance “on a fairly regular basis.”When she was asked what kind of guidance, she said

“Everyday stuff. Normal stuff,” Satan’s Guidance is “better than Jesus’ guidance. I’ve been there, done that. Jesus is ok. He’s boring, you know? He gave Satan a bad rap. Jesus is the goody two shoes with no life. I prayed to Satan last Friday. I was in a foreign city; I barely knew anyone. He spoke to me quietly, prompting me to dress like a boy. I went out into the street dressed like a boy and I just walked and walked, following his whispers. I found myself in a dark alley by some kind of industrial area. Two big guys, rough guys you know, they suddenly appeared, and I don’t know, I guess you’d call it rape. They took me forcefully. Yeah, it was painful. But to be totally honest, the whole experience was transcendental. It was one of the most amazing experiences of my life. When they were both finished, I started straight into their eyes and said, ‘Hail Satan.’ I’m not sure they understood but they appeared calmed by my words.”

Much to the chagrin of those in charge of predictive programming propaganda, the trending topic gained little traction in 2020 (people were a bit distracted by more important things than Miley Cyrus that year, apparently). The article is, however, back in the mainstream murmur mill and trending now in 2022.

In related news, in 2021, Cyrus posted a picture of herself on her Instagram account, sporting a very rare pair of Lil Nas X’s limited edition “Satan shoes”– a drop of real human blood is infused into the shoe along with a pentagram pendant, inverted crosses, and “Luke 10:18” stamped on the side; the Bible verse references Satan “[falling] like lightning from heaven.” (You can read my Real Dark News article on the Lil Nas X “Satan shoes” HERE).

Sadly, the writing was on the wall back in 2011, when Miley was still 19 years old—at least it was to her father, Billy Ray, who claims to have been physically shaken by an Adopt-a-Highway sign near the Disney studios dedicating that stretch of road to Atheists United. Ray recalls that seeing the sign became a literal sign that he and his family would be “attacked by Satan.” Ray admitted that entering the industry was tantamount to being put on the “highway to darkness.” When asked if he believed his family was presently under siege, Ray replied, “No doubt. There’s no doubt about it.” Within the same interview (where Ray was listing everything from handlers to Satan as what destroyed his family) Ray said the of Hannah Montana—the Disney show that launched his daughter into super stardom,