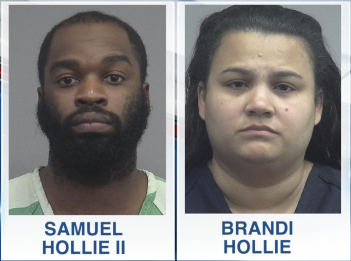 Last Friday, Police in Gainesville Florida responded to an apartment complex where it was reported that two young children had been hanging out for several hours.  A boy and a girl, ages 10 and 8, were approached by Police whom they told they didn't know where their parents were, but they did not want to return home as they had been abused.

The boy spoke to investigators and told them that he and his sister were not liked by Samuel Hollie, 29 or Brandi Hollie, 33.  He recounted times where he was beaten with a belt as well as shocked and burnt with a stun gun, allegedly because Samuel was "tired of him being bad."

When asked about his and his sister's malnourished appearance, he informed investigators that they were feed bread and water, with only occasional scraps from Samuel or Brandi's meals.  The girl corroborated this saying that if she was asked if she wanted more, she would answer "no," for fear of being beat if she said otherwise.

During the girl's interview, she stated that if the Hollie's ever got mad, she was forced to sleep in a closet where she would be awoken in the night by the Hollis using a baseball bat on the door.  She also stated that their adoptive parents would beat her and her brother with a belt or baseball bat, sometimes to the point that she would vomit and pass out.  She also claimed that she had been burnt with lighters, matches, and stunned.

“I would say these types of cases are extremely rare especially in our community.  Unfortunately, this is a pretty severe case and I cannot stress the severity of the injuries these children endured. The scarring would make a parent sick to their stomach."

The Hollies admitted to using corporal punishment, but claimed that the scarring on the children was either from before they entered their care in 2015, or from bedbugs.  The arrest warrant states, however, that medical records pre-dating 2015 showed no records of bruising or injuries to the children.  A medical exam performed after the children were interviewed revealed severe scarring and bruising, and a disfigurement to one of the children.

According to Police, there was a third child in the home that had not been abused.  All three have been removed and are now in custody of family services.

Samuel and Brandi are both being held on $300,000 bond and are charges with two counts each of aggravated child abuse and child neglect.  Their court date is pending.