The last evidence that investigators have found so far concerning the whereabouts of 21-year-old Leila Cavett was footage from a security camera in  Hollywood, Florida RaceTrac station.  Her 2-year-old son Kamdyn was found walking around a Miramar apartment complex barefoot the following day which sparked the search for Cavett.  According to CBS4 that apartment complex is approximately 2 miles from Cavett's last known location.

There was a strong outpouring of community support for the young mystery boy as officers worked to establish his identity and find his family.  It was late afternoon of the following day when the Miramar Police Department was able to issue a statement saying that they were searching for Cavett, suspected to be the child's mother, and that they were "concerned for her safety and well-being." At that time, Kamdyn had already been placed with a foster family through Florida's Department of Children and Families.

The boy's father, 35-year-old Daniel Lee West of Dawsonville, Georgia contacted the Miramar Police Department in an effort to claim his son.  They informed him that he may be required to show proof that he is in fact Kamdyn's father but would get further instructions from the Department of Children and Families. As of July 30, Kamdyn remained in foster care, but the family has been able to speak with him through online video chats.

On the 28th, the Hollywood Police Department located Cavett's late 90s Silverado 3500.  While there, police made contact with a man that was approaching the vehicle.  38-year-old Shannon Ryan reportedly told police that the last time he had seen Cavett was when she and her son got into a vehicle with several black men at the RaceTrac gas station on the 26th.  Investigators made sure to follow up on the possible lead and checked the surveillance footage for the 26th.

While they were unable to find any footage such as Ryan had described to them, they did find something that interested them when reviewing the footage pulled from the apartment complex Kamdyn had been found wandering in.  They spotted Ryan's 2004 Lexus minutes before Kamdyn was found.

"Ryan's Lexus is very distinguishable because it is missing the front bumper" the complaint states, according to the Miami Herald.

Investigators stated that his vehicle was seen leaving the RaceTrac at 8:15 am on the 26th and returning at 8:36 am, the window in which Kamdyn was found in the apartment complex.  They additionally traced his cell phone location for the time in question and determined that he was in the area of the Willowbrook Apartments.

When questioned by officers, employees for the RaceTrac evidently told them that they recalled seeing women's clothing and toys in their dumpster around July 26th, and one employee reportedly "recognized a distinct pair of floral pants worn by [Cavett] in a picture shown to them."

While continuing to search for Cavett, investigators began to look more closely at Ryan.

A review of security footage from the Walmart showed him purchasing Hefty Strong 39 Gallon Extra Large Trash Drawstring Bags, two boxes of Extra Strength Carpet Odor Eliminator and a roll of Advanced Strength Duct Tape.  A review of searches conducted on his cell phone showed that Ryan had researched how to make chloroform and the garbage pick-up schedule for Hollywood, Florida.

A friend of Ryan's told investigators that he had been contacted on the 26th about buying a GMC truck for $1,000.

On August 13th the FBI made an appeal for those with any information to please reach out and contact them concerning the case.  They can be contacted at 1-800-225-5324(CALL-FBI) or go to FBI.gov/tips.

On the 15th, Ryan, a self professed "witch" and "god" whose birthday happens to fall on October 31st, was arrested by the Boward County Sheriff's Office.

While the investigation into Ryan was ongoing, he took to Facebook to post a video on August 9th describing his relationship with Cavett.  According to his video, he first met her in 2019 on a rainy night when she was seeking shelter.  He said the he was told a story he didn't believe, but took her and her son into his home nonetheless.  He asserted that Cavett stole from him on two occasions despite his helping her to get a vehicle.

“I hexed her,” Ryan said. “Until you return my [stuff], everything you took, everywhere you go, people will try to take your son.”

Ryan asserted that he did not know that Cavett had gone missing until told so by investigators because he doesn't watch television.

In another post, reported by the Sun Sentinel, Ryan said on the 13th, "If you think I am guilty, come get me.  Know what energy you are playing with."

Ryan made his first appearance in court on Monday the 17th for two counts of lying to a federal officer.  He remains in  custody at the Boward County Main Jail.  There are conflicting reports as to whether or not he has been charged in federal court with kidnapping, but more charges are expected. 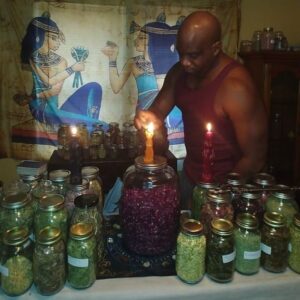