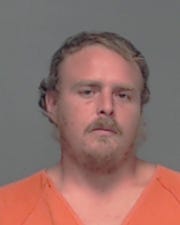 In what could be chalked up by many as just another story of horrid abuse at the hands of a parent that is supposed to love, nurture, and care for a child, the child made a single statement as reported by GoSanAngelo, that stands out.

According to the affidavit in the case, when interviewed about the abuse, the child simply responded, "I was just asleep ... and things happen. That's all."

The picture painted by the affidavit though, shows that the father, 25 year old Ronnie Winans had little patience for his 6 year old son.  Winanas was known to throw hangers and tea bottles at the child with enough force to leave marks, by his own admission, "in an attempt to get his attention, and not as punishment." The child confirmed that things were thrown at him because Winanas "did not like it when he moved around a lot," adding that things were not thrown at the other children, only him.

On August 8th, sheriff's deputies responded to a call of suspected abuse when the mother called to report that she had found bruising on the boy's legs.  He would not disclose to her the circumstances that caused the bruising.

When the deputy wrote his initial report, he said the marks were "consistent with blunt force trauma."  While taking photographs of the bruises which were all linear in nature, and one of which stretched at an angle from the child's hip to his inner thigh, he disclosed that his father had "tied him to a door with a dog leash."

On the following day, Children's Advocacy Center of Tom Green County conducted further interviews which included a witness that stated she had previously seen Winans hit the boy in the leg with the handle of a hammer.

According to the affidavit, a female relative was able to give greater detail concerning the boy's statement of being bound to a door with a leash.  She stated that the leash was tied to a corner of the garage and that it had been tied in such a manner that if he had tried to get away, it would have tightened around his waist.  The boy reported that it was so tight that he had trouble breathing and that there had been a temporary mark.

In an investigation at the home a green leash was recovered as well as a hammer that was found sitting on top of a bedroom dresser.  Both items were booked into evidence, and the rubber handle of the hammer was noted as being "consistent with the size and shape of the contusions located on (the child's) right and left legs," according to a deputy as stated in the affidavit.

It wasn't until the 15th though, that deputies arrested Winans on suspicion of injuring a child with intent to commit bodily injury, a third-degree felony.  The following day, he was released on $15,000 bond.

Winans has insisted that the leash used to bind his son was loose and denied any knowledge of bruising on the boy's legs.  It does not appear as though an indictment has been filed at this time.