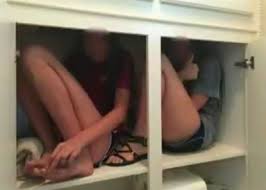 Twitter and Reddit blew up this weekend with “conspiracy theories” claiming that $13,000 – $15,000 industrial cabinets (all given product names mysteriously named after missing children) seemed a bit too high for their price points.

The Sun, Snopes, and other extremely reliable news sources are saying otherwise. The Sun, links the story to the (quote), “…2016 refuted conspiracy theory known as Pizzagate.”

Reddit and Twitter users circulating the story were speculating that WayFair may not be a legitimate retailer, but that the company is just operating as a front for a child trafficking ring.

But the story released by the mainstream media is that there is a slew of simple-minded social media whores out there who believe children are being shipped inside overpriced cabinets. This leads to a ridiculous mental picture of kids twisted like pretzels into boxes with no food, water, latrine, or breathing holes. And because this mental image is so outrageous, the whole story must be also. Right?

Read between the lines people—THERE ARE NO CABINETS!

Do you think children are also being stuffed inside the $10,000 throw pillows also available on the WayFair website?

The whole point is that this may not be a legit furniture company at all. People aren’t ordering $15,000 metal cupboards and $11,000 baby albums–they are ordering children on the black market.

These children are “delivered” on private planes that belong to the Epsteins of the world—not locked inside office furniture with a bunch of packing peanuts and dropped off on your doorstep compliments of a bunch of inept FedEx delivery workers who can’t figure out why blood-curdling screams are coming out of these unusually heavy packages.

In a statement to Newsweek on Friday, a spokesperson for Wayfair said: “There is, of course, no truth to these claims.

“The products in question are industrial grade cabinets that are accurately priced.

“Recognizing that the photos and descriptions provided by the supplier did not adequately explain the high price point.

“We have temporarily removed the products from site to rename them and to provide a more in-depth description and photos that accurately depict the product to clarify the price point.”

In response to WayFair’s defense in Newsweek, a Reddit user responded, “Well how about the fact that if you look up the SKU # of any of these products named after girls, you will see that the image results on any uncensored search engine (like yandex) shows images of children in bikinis. What do you make of that?”

In addition to the grossly overpriced cabinets all named after missing children in bikinis, Reddit and Twitter users also found it suspicious that this information is coming to light just 12 months after 500 WayFair employees walked off the job at their Boston headquarters after learning their company had profited off selling beds to detention centers holding migrant children.

Also interesting to note, Niraj Shah, a billionaire businessman in his 40s, who in 2017, became a director of the Federal Reserve Bank of Boston, is a co-founder and the CEO of WayFair.com,

But, apparently, Jeff Epstein and his girlfriend Ghislaine Maxwell were the only two human beings alive involved in child sex trafficking, and now that they’ve both been captured, the world is free of this vile practice.

Come on Sun and Snopes—in light of Jeff Epstein, Ghislaine Maxwell, Harvey Weinstein, Hollywood starlet/politician addiction to Adrenochrome, and Planned Parenthood’s harvesting of human organs—is the idea that Comet Pizza or WayFair Furniture might have their hand in this highly profitable cash cow really so difficult to comprehend?