In New York on August 14th, 2019 at midnight, a window of one year was opened for those that had been victims of child sexual abuse to file law suits regardless of statutes of limitation.  The first 24 hours saw 427 lawsuits filed.

Now, just days before the deadline closes, information has been released concerning a lawsuit that was filed in the New York Supreme Court, Ulster County under this very act back in February.

Alison Carey, 57, the elder sister of famed singer Mariah Carey, 49, filed suit against their mother, Patricia A. Carey.  The summons states that Patricia "allowed and encouraged other male persons whose identities are at present unknown to engage in sexual acts as defined in New York Penal Law, specifically 130.52 (forcible touching), and 130.65 (sexual assault in the first degree), while Plaintiff was approximately 10 years of age."

The summons further alleges that Alison was "forced to witness adults engaged in sexual acts with both adults and children during middle of the night satanic worship meetings that included ritual sacrifice."

The summons states that as a result of the abuse, Alison has been "diagnosed with post traumatic stress disorder, anxiety and major depression, leading her to misuse both legal and illegal drugs in an attempt to suppress the horrific memories, and to undergo extensive  professional counseling." 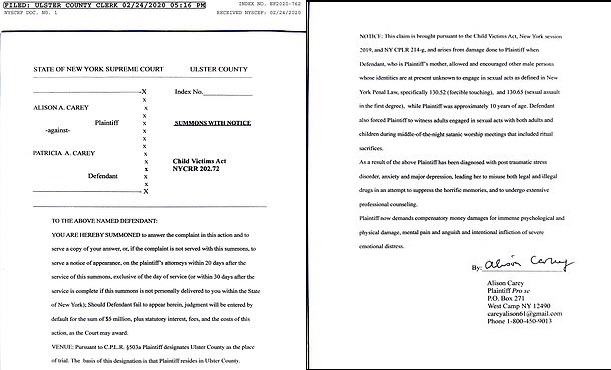 Fox News states that it confirmed that Patricia had not responded to the summons within the 20 days provided.  The claim is seeking $5 million, plus statutory interest, fees, and the costs of this action."

The sisters are said to have become estranged after a falling out in the 1990s, and in 2016 Alison was arrested for prostitution in New York after she solicited an undercover police officer.

In 2018, Alison gave an exclusive interview with the Sun Online in which she detailed horrific events from her childhood including, being awoken by a family member between 2 and 4 am to be taken to an old hall where everyone would wear robes and chant in a different language.

“I was sexually abused there. They told me that if I didn’t do what they told me or if I told them what was going on they would harm Mariah," she said.

According to the Sun, Alison and Mariah's parents divorced when the girls were approximately 11 and 3 years old respectively.  Mariah continued to live with their mother and Alison lived with their aeronautical engineer father.

Mariah announced her memoir, "The Meaning of Mariah" last month.  In a statement on the website dedicated to the book she said, "This book is composed of my memories, my mishaps, my struggles, my survival and my songs. Unfiltered. I went deep into my childhood and gave the scared little girl inside of me a big voice. I let the abandoned and ambitious adolescent have her say, and the betrayed and triumphant woman I became tell her side."

Tribute to a Trailblazer

Two arrested in case of missing woman kept in a cage

Nurse pleads not guilty to all 18 charges