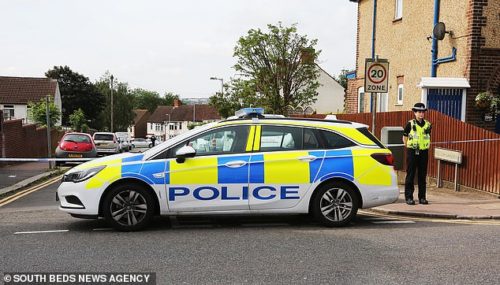 The usually quiet neighborhood of Preston Gardens, Luton, 30 miles north of London was startled awake Tuesday morning between 1:45 and 2:10 am by screams.

Neighbors reported hearing multiple voices, slamming car doors, and a male voice saying, "run, run, run!"  Then there was the screaming.  One teenager, awake on her cell phone, reported that it became clear that what she was hearing was "someone screaming for his life."  Another neighbor that wished to remain anonymous, states that the shouting and screaming woke her up.  She described what she heard as "animalistic."

Outside, a 15 year old boy was being stabbed in excess of 20 times.  He was transported to a nearby hospital with life threatening wounds.

Throughout the day on Wednesday, 30 Police were continuing to investigate the area, resulting in residents needing to check in with Police to access even their homes or vehicles.

Police are asking that anyone with information about this case, regardless of how seemingly insignificant it may be, contact them and reference Operation Bald.