Jacksonville, Florida: 13-year-old Tristyn Bailey was reported missing on Sunday morning at approximately 10:00 am. The last time she was seen was at 1:15 am at the Durbin Amenity Center.

Shortly after she was reported missing the search for her began. At approximately 6:00 pm Sunday the St. Johns County Sheriff's Office concluded their search and soon after announced that "a body was discovered in the immediate area" which was tentatively identified as Tristyn.

While the investigation remains "active and ongoing," the suspect, identified as 14-year-old Aiden Fucci has been detained and as of this morning, was ordered by Circuit Judge Michael Orfinger to be detained by the Volusia County Regional Detention Center for 21-days citing probable cause that an act of delinquency occurred.

He stands accused of second degree murder at this time. The state attorney's office has until the expiration of those 21 days to determine whether or not they will try Fucci as an adult.

A selfie that Fucci took in the back of a police cruiser, sometime after Tristyn died, but before the discovery of her body, has garnered a lot of attention. 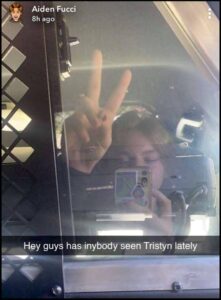 St. Johns County Sheriff Rob Hardwick spoke at a news conference yesterday and addressed the role that social media could play in their investigation.

"I will say our real-time intelligence center really has captured all these videos as much as we can. We monitor it [social media]. Unfortunately, with some of these things that are actually, maybe you think is detrimental to the case, actually help us in the case." He later confirmed "all social media is being looked at and is part of the investigation."

The sheriff's department has confirmed that Tristyn and Fucci both attended Patriot Oaks Academy but stated that they had not yet confirmed whether or not they were classmates.

During the press conference, Hardwick stated "there are multiple crime scenes" that are still being investigated.

Earlier today the St Johns Sheriff's Office issued a press release disclosing that the medical examiner Dr. Predrag Bulic had determined that Tristyn's cause of death was "sharp force trauma by stabbing" and the manner was ruled to be homicide.