Mount Vernon, Maine: 15-year-old Aiden Grant has been identified as the juvenile arrested and charged in connection with the Monday, July 18 murder of 14-year-old Brooke McLaughlin.

Brooke had just turned 14 two weeks prior and her murder reportedly took place on Grant's birthday.

Grant was arrested on Saturday morning.

According to his Facebook page, Grant had been in a relationship with Brooke since February 13, 2022. 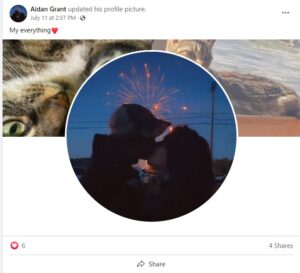 At this time Grant is being held at the Long Creek Youth Development Center in South Portland. While charges have been filed, it is not known at this time if the District Attorney is seeking to charge Grant as an adult.

At this time, little information about the murder, including Brook's cause of death, has been released as the investigation remains ongoing.

A statement from the office of Maine Department of Public Safety Public Information Officer Shannon Moss stated that  "additional information will be released through court documents."

A close family friend, Donna Walker spoke with The US Sun saying saying that Grant was someone Brooke "trusted and felt safe with."

She stated that she "met him a handful of times but I see his [family] on a regular basis. Neither he nor any of his family have shown any type of aggression or anything like that."

She described Grant as "polite, well-mannered, respected," and said that they were now "kind of in shock and second-guessing everything now."

"I would have never dreamt that the kid could possibly do something like this," Donna stated. "His [family] has reached out to us and they're in just as much disbelief as everyone else."