Honolulu, Hawaii: The United States Attorney's Office for the District of Hawaii has announced that 33-year-old teacher Alden Bunag has been ordered to be detained pending trial following the filing of charges that he distributed child pornography between November 2019 and October 2021.

Bunag was arrested last week at an Oahu high school where he was working as a summer school teacher according to the statement.

The Federal Bureau of Investigations has not ruled out the possibility that there could be more victims. While the statement does not seem to indicate hat more charges are possible, should more victims be identified, there would likely be further charges.

If convicted on the charge of distribution of child pornography Bunag faces a mandatory minimum sentence of five years up to 20 years imprisonment.

If the name sounds familiar, it is likely because Libs of TikTok tweeted about his arrest, showing one of his former, undated, tweets.

This teacher was just arrested for reportedly having sex with a 13-year-old student while recording it. pic.twitter.com/YbhApinZW1 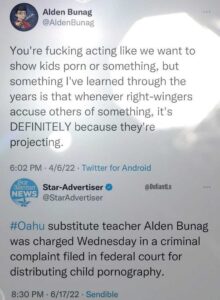 Investigators, according to the criminal complaint and affidavit, "reviewed at least two video recordings of Bunag's sexual conduct with a then 13-year-old former student, at least one of which he sent to another person in Pennsylvania."

Additionally, agents reviewed other images identified as child pornography which Bunag is believed to have sent to other individuals.

It is not clear why an additional charge of production of child pornography was not included in the indictment.

"The sexual abuse of children- a reprehensible crime- is especially exploitive when committed by a teacher against a minor student victim," Claire E. Connors, United States Attorney for the District of Hawaii was quoted as saying, "Recording such crimes and distributing the images to others compounds and perpetuates the victimization."

"The FBI will vigorously hunt predators such as Alden Bunag who prey on our keiki," FBI Special Agent in Charge Steven Merrill stated. "Bunag has been detained in what is an especially egregious and serious case as he was a teacher within Hawaii's Department of Education whose young vitims may be unaware of what happened to them. Individuals with information, or those who believe they are a victim, are urged to immediately contact the Honolulu FBI at (808) 673-2705 or BunagInvestigation@fbi.gov. These tip lines were specifically set up for this investigation as we believe there may be more victims out there who may assist in our investigation."