Beginning in October 2020 the United States Marshals in Iowa worked in partnership with federal, state, and local law enforcement agencies to locate 21 vulnerable, critically missing juveniles as a part of Operation Homecoming as of March 23, 2021.

The National Center for Missing and Exploited Children also worked with the northern and southern districts of Iowa as well as the Iowa Division of Criminal Investigation's Missing Persons Clearinghouse to assist in locating the children who were all between the ages of 4 and 17 years old.

These children were described by the U.S. Marshal's press release as "some of the most at-risk and channeling recovery cases in the area, based on indications of high-risk factors such as exposure to narcotics, child exploitation, physical or sexual abuse, and medical or mental health conditions."

Nine of the children recovered were located in different states across the nation including Arizona, Nebraska, Minnesota, Florida, Mississippi, Tennessee, Illinois, Ohio and Indiana.

During the recoveries, two individuals were arrested, narcotics and two firearms were seized, and four separate investigations into human trafficking were launched.

“The goal of our involvement with missing child cases is not only to safely recover Iowa’s missing children, but also to aid our local and state partners who work these cases daily,” said Deputy U.S. Marshal Scott Cannon, Missing Child Investigations Coordinator for the Southern District of Iowa. “The Marshals Service is uniquely suited to provide assistance based on our expertise as the premier agency in tracking fugitives. We can use some of the same skill sets in recovering missing children as we use during fugitive investigations.”

One of the children that the U.S. Marshals were looking for but unable to find is Fredrick Workman who was 15-years-old when he went missing from Des Moines in August of 2013. A reward of up to $5,000 is being offered for information that leads to his location. 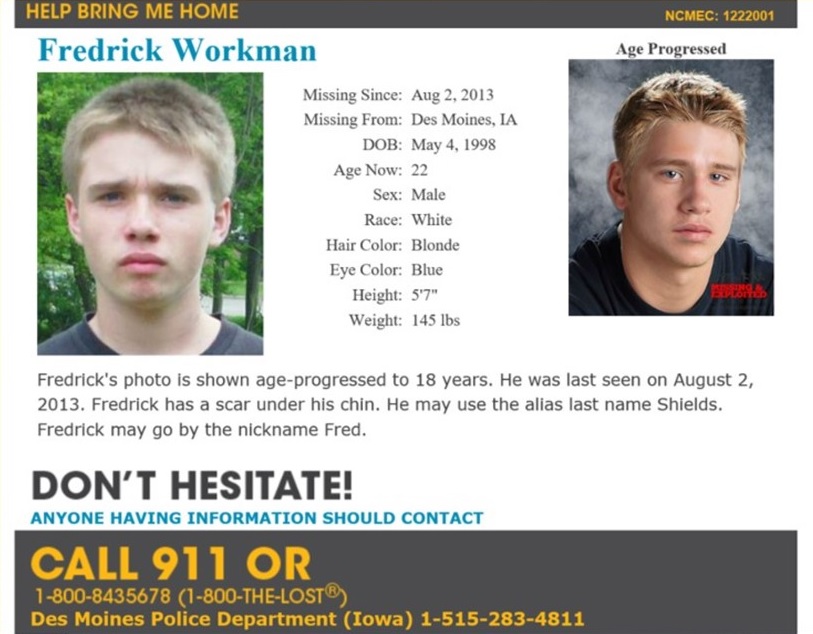 Anyone with information about his whereabouts is urged to contact NCMEC at 1-800-843-5678 or visit their Cyber Tipline at www.missingkids.org.

“The key to success, for these projects, involves a joint effort by public safety, working as ONE-entity with ONE-goal: Keeping our children safe through the apprehension of these critical offenders,” said U.S. Marshal for the Southern District of Iowa Ted Kamatchus.