I've lost count of the number of times I have gone back and forth on whether or not to actually write this article.

When I first stumbled upon the letter written by a concerned grandmother to an advice column on Slate, it seemed like a no-brainer.   Since then though, this article has not only sat for days but even at one time ended up in the recycle bin for a period of time.

But I couldn't abandon it entirely.  I knew that under different circumstances, a similar letter could easily have been written by my own grandmother.  Looking at it from that perspective made it clear that the advice given needed addressing as I personally found it woefully inadequate.

While the author of the response is no doubt far more skilled than myself when it comes to a writing resume, (Slate has been around since 1996 and has evidently been awarded for its "strong editorial voice and witty take on current events,") not every situation can be dismissed with a witty tongue in cheek response.  Sometimes we have to stop and look at situations that make us feel uncomfortable and actually do people a disservice when we try to joke our way out of them.

Such, I feel, is the case in the situation with this grandmother.  Here is what she wrote:

My 2.5-year-old grandson has been having a recurring nightmare for the past week and a half. He wakes up very upset saying there is a lady in his room. When asked if she talks to him and why he thinks she is there, he says that she has to get something from his room, and she wants to put something on his foot. This has happened at least five times.

It has progressed to the point that he is afraid to go to bed. My daughter is in the process of potty training him, and he also has a new sister (4 weeks old). I know that these life changes can cause children to have nightmares, and I understand that imagination is vivid at this age. However, this just seems so specific and kind of creepy. We are all at a loss as to how to handle it and, of course, upset that our sweet little boy is dealing with this. Any suggestions?

I'm not going to bother to reproduce Nicole Cliffe's response.  The article is linked above if you wish to see what Slate had to say.

The fact of the matter is that since you're reading this, you already likely know that the supernatural is very real and dismissing something like this as little more than "imagination" that can be solved with a “weird lady spray” can have long lasting detrimental ramifications to the spiritual life of that child.

The fact that this event has reportedly happened "at least five times" in ten days is concerning to say the least.  It's no wonder the young kid is afraid of going to sleep now.

The only complete and lasting solution to what this family is dealing with is found in Jesus.

He alone has the ability to stop things such as this child reports in their tracks.  Parents relying on a placebo of "weird lady spray" or any of the other varieties of this type of answer to deal with these types of situations ultimately seem to do little more than give added reasons for the children to distrust and rebel further against their parents when they hit that age and begin to reminisce about their experiences growing up. Or even potentially open up doors even further making matters even worse.

Anyone that has done even cursory research into various sleep phenomenon, (such as sleep paralysis,) has likely come across at least one account where someone from a "non-religious" family has, out of desperation, called out the name of Jesus and found that that paralysis immediately lifted.

I bring this up to say that if this young boy, even at a mere 2.5 years of age were to cry out, I know beyond a doubt that Jesus would show Himself powerful and the lady would be gone.  That's not to say that ending this would be a "once and done" type situation necessarily.

Has the family put their faith in Jesus?  Are they raising their children in the fear and admonition of the Lord?  I would have to guess, based on the fact that the grandmother is soliciting advice from an online magazine that the answer is no.

Without getting into speculation about what could be going on so far as doorways or generational matters, the crux of the matter is that the family needs to turn to Jesus.  And ultimately, whether or not the family as a whole does, that boy can find deliverance from these "nightmares" and peace in trusting in Jesus. 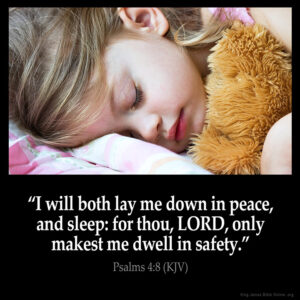 I can say this with absolute confidence because of my own experience as a child.

I cannot state with certainty at what age I began to experience sleep paralysis, but I know that it was recurring for some time and that it finally ended, once and for all, when I was somewhere between 4 and 5 years old.

I can still remember the feeling of dread creeping over me when I would realize what was happening.  Almost a "great, here we go again" situation.  I never told my parents about what I was dealing with.

One night, something finally clicked in my young brain and at some point I remember crying out in my mind, "Jesus, I need you!"  Immediately there was relief and by the grace of God, I have never once dealt with sleep paralysis since that night.

This child doesn't need a nightlight, a spray bottle or some solution based on the latest and greatest pop psychology.  None of those will address the greater issue here.  Without Jesus, no one has a leg to stand on.  Only through His blood shed on the cross for the remission of our sins can we emerge victorious from the attacks of the enemy.

Mother sentenced to 30 years for continuous sexual assault of daughter