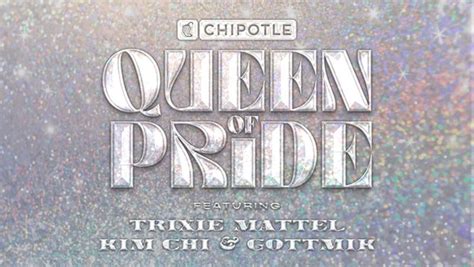 I received an email from my local Chipotle Mexican Grill on June 12 advertising an upcoming event at the Lakeville, MN location. The event was a “Drag Lunch” featuring drag queens Trixie Mattel, Kim Chi, and Gottmik. The entertainers will come dressed in “Chipotle-fied looks” and perform stand-up comedy sets. Proceeds from every lunch sold will be donated to the charity of each performer’s choice: GLAAD, Trans Lifeline, and The Human Rights Campaign. Each charity can raise a maximum of $15K a piece, with the “winner” receiving an additional $10K in prize money. What follows is my open letter to Chipotle.

Chipotle should be commended for its dedication to a zero-tolerance discrimination policy. As a person born with a noticeable deformity, I can attest, this ethos is much needed, and greatly appreciated. With that said, there is a vast sea of difference between protecting the rights of your LGBTQIA+ employees, and foisting the agenda of the LGBTQIA+ community upon an otherwise incurious community.

I understand that being recognized as a pro-gay business is en vogue. I also understand that it is extremely lucrative. Chad Kempe, the man behind Flip Phone Events raised a whopping $88K in one afternoon during a Drag Brunch at Union Rooftop restaurant in Minneapolis.

But cashflow aside, are we really “supporting and empowering” LGBTQIA+ individuals when we provide these types of public platforms? Think about it. We are inviting drag queens into the public square, putting them in silly “Chipotle-fied looks,” and having them entertain us while we eat. Doesn’t this sound a bit reminiscent of the old circus side shows where unfortunate deformed and disabled individuals were corralled into tents where patrons, for a small cover charge, could come in to freely point and gawk?

If you don’t want to take my “un-woke” word for it, perhaps you will listen to the words of unrepentant, loud and proud drag queen, Kitty Demure, who recently went on record speaking to moms saying, “I have no idea why you want drag queens to read books to your children. I have no idea. What in the hell has a drag queen ever done to make you have so much respect for them and admire them so much, other than to put on make-up and jump on the floor and writhe around and do sexual things onstage?”

I have spent the last three years working with the ex-LGBTQIA+ community (a massive multitude of individuals whose numbers have been suppressed and whose voices have been silenced because their lifestyles fly in the face of the “scientific facts” being disseminated upon the masses). Over the course of these three years, I have met some precious people…many of whom have become dear friends. They are survivors. They are overcomers. Without exception, every one of them that I have had the pleasure of getting to know has escaped and overcome pasts that the average human being could never imagine. Sexual abuse, rejection, abandonment, toxic shame, and trauma. Without exception, these individuals speak about a rock star lifestyle of drugs, alcohol, substance and sex addiction—a constant attempt to cover up and compensate the constant feelings of abandonment, abasement, and abuse.

Is it “loving” to ignore the deep-seeded pain, sorrow, loss, abuse, and trauma of fellow human beings? Should we sweep this level of hurt under the carpet and encourage these individuals to remain as is? And for what—our entertainment? Rather than befriending these individuals and getting to know their heart, we settle for inviting them to rooftops, burrito joints, and public libraries where, for a small cover charge, we can gawk at them like they are nothing more than soulless, circus freaks.

This is why, despite Chipotle being my all-time favorite restaurant, one that I frequent multiple times a month (sometimes twice a week!) I can no longer support Chipotle. As of June 12, I will not be returning to a Chipotle restaurant; because the wholeness, health, and wellbeing of fellow human beings is of more value to me than an overpriced cup of guacamole (even if it is best guac I’ve ever tasted).

Where will the “up to $55K” raised at this (and forthcoming) “Drag Lunches” go? It will go towards organizations that are striving to unwittingly keep LGBTQIA+ individuals in a perpetual unhealed state of trauma and toxic shame, and rather than empowering these individuals, these organizations will blindly keep them forever relegated in the public’s minds-eye to that of sideshow attractions that exist for the sole purpose of satiating our unquenchable quest for entertainment.

Politics, proclivities, and philosophy aside, I urge you, Chipotle, to simply stick to doing what you do best—burritos. If I want help in transforming the hearts and minds of my community, I’ll volunteer at a church or a rec center. When I walk into a Chipotle, I want lunch—not a lecture.