UPDATE:  Authorities announced on Thursday, September 5th, that Nalani's death has been ruled a homicide despite the fact that they are still awaiting the results of a medical examination and medical records.

They disclosed that when Nalani was found, she was still bucked into the same car seat she'd been using on Saturday evening, and there were no visible signs of trauma on her small frame.

Nancy remains in custody at the Allegheny County jail, and has not been charged at this time with homicide, though it seems that the prosecutors are convinced that they are not looking for any further suspects.

This article will continue to be updated as the story unfolds.

It's the outcome that no one wanted.  Tuesday evening, Allegheny County police confirmed that they had found the body of 23 month old Nalani Johnson that had been the subject of an Amber Alert issued Saturday evening.

An autopsy is scheduled to take place today, and police were understandably closed lipped concerning details of what appeared to have happened to Nalani and what tips led them to search a wooded section of Pine Ridge Park in Burrell Township.

District Attorney Patrick Dougherty only made reference to a woman "currently in custody," saying, "We believe that she is involved. To what extent, that is still being determined."

That woman in custody is Sharena Nancy, 25, who was arrested later Saturday night after Nalani went missing, and charged with kidnapping of a minor, interference with custody of children and concealment of whereabouts of a child.  Her first court appearance is scheduled for September 16th.  She is being held without bail.

There are two very conflicting statements concerning what happened to Nalani on Saturday evening.

The part that both Nancy and Nalani's father, Paul Johnson agree on is that he, Nalani and another friend were all in Nancy's vehicle.  At some point in the evening, an argument ensued between Nancy and Johnson who had become acquainted over social media and begun an "intermittent romantic relationship."

Johnson says that once he exited the vehicle, he turned to get his daughter and her car seat, but Nancy took off.  According to statements, he attempted to call her several times on her cell phone but got no answer.  At about 5 pm, he called 911.

Just before 7:30 that evening, Pen Hills police initiated a traffic stop on Nancy along Rodi Road, but neither Nalani nor her car seat were in the vehicle.  Nancy was taken at that time for questioning.

Her story is vastly different from Johnsons'.

She told investigators that Johnson had sold Nalani for $10,000 and that she was to facilitate the transfer of Nalani on his behalf.  She alleges that Johnson showed her an image of a black woman that she was to meet along the road, "twenty minutes" from a gas station in Monroeville along US Route 22.

She alleges that everything transpired as Johnson told her it would.  She was flagged down by the woman standing next to a silver SUV with out of state plates, and handed over Nalani and her car seat.  She said that she noticed that there was another female in the vehicle before she drove off.

Nancy told police that after the hand off had been completed, she drove around smoking cigarettes and talking on the phone with her husband.

According to investigators, they used cell phone tracking to determine that after Nancy took off with Nalani in the back of her vehicle, she drove east on Route 22 all the ways to Blairsville, Indiana County, area.  At some point in the evening, before she returned to the Pen Hills area, tracking shows that Pine Ridge Park was a stop. 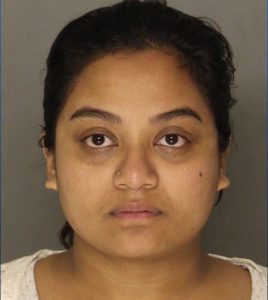