On August 20 a Denver grand jury issued a 33-count indictment against seven individuals and 12 businesses stemming from charges that they ran a human trafficking ring "in plain sight."

Operation "Bad Apple" began in 2019 when McCann's office received a tip from the Manager of Tax and Licensing Office in Aurora concerning the possibility of illicit massage parlors moving into Denver after being shuttered in Aurora.  A tip was additionally filed with the FBI by Aurora.

The seven individuals are charged with “engaging in a pattern of racketeering in which the massage parlors were the nexus for running a complex pimping, prostitution, money laundering and tax evasion operation that generated millions of dollars,” McCann's office said in a press release.

“We believe that the defendants were hiding in plain sight as they trafficked women from China to engage in sex acts with customers of their massage businesses,” McCann said.

All but two of the accused, Ying Guo and Xiong Xie are in custody.  Denver Police are asking for help in locating them and are offering a cash reward for tips leading to their arrest.  They are asking anyone with information to contact them at (720) 913-7867. 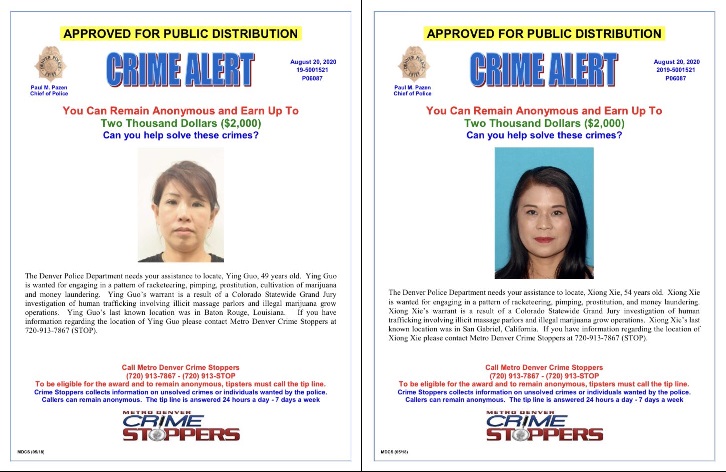 During the investigation into the massage parlors, undercover officers negotiated deals with employees for sexual activities.

In January, two of the 14 victims identified told investigators that they paid $14/day to live inside of the Apple Spa where they worked.

While the women being trafficked are said to have received a portion of the fees collected from their clients, the remainder went to the suspects.

“The criminal enterprise extended across the Front Range and profited off of the exploitation of vulnerable people,” Attorney General Phil Weiser said. “From our investigation, we also tracked criminal proceeds through a network of bank accounts to support the money laundering charges in the indictment. Furthermore, illegally operated grow houses diverted revenue from the state.”

According to the Sentinel Colorado, officials have stated that the group operated in Colorado, Oklahoma, California and Louisiana.

A Colorado court docket search shows that there is a status conference scheduled for September 17 at 8:30 am.