Los Angeles, California: First, it was ex-girlfriend Evan Rachael Wood taking to social media to name her abuser in February, sparking an investigation into domestic abuse charges by the Las Angeles Sheriff's Department.

Then on April 30 Esmé Bianco filed a lawsuit against Manson alleging sexual, physical and emotional abuse as well as trafficking.

"For far too long my abuser has been left unchecked, enabled by money, fame and an industry that turned a blind eye," she said on Twitter. "Despite the numerous brave women who have spoken out against Marilyn Manson, countless survivors remain silenced, and some of their voices will never be heard. My hope is that by raising mine I will help to stop Brian Warner from shattering any more lives and empower other victims to seek their own small measure of justice."

According to the lawsuit, seen by DC Patriot, Bianco alleged that Manson deprived her of food and sleep while providing her with alcohol and drugs. She also claimed that she was locked in a bedroom, whipped, shocked, and threatened with rape.

The lawsuit additionally claims that Bianco was chased with an ax and cut with a "Nazi knife" without consent and that those images were then shared online.

Wile it does not state how the images were shared online, Manson has shared images of other women cut and bleeding online. 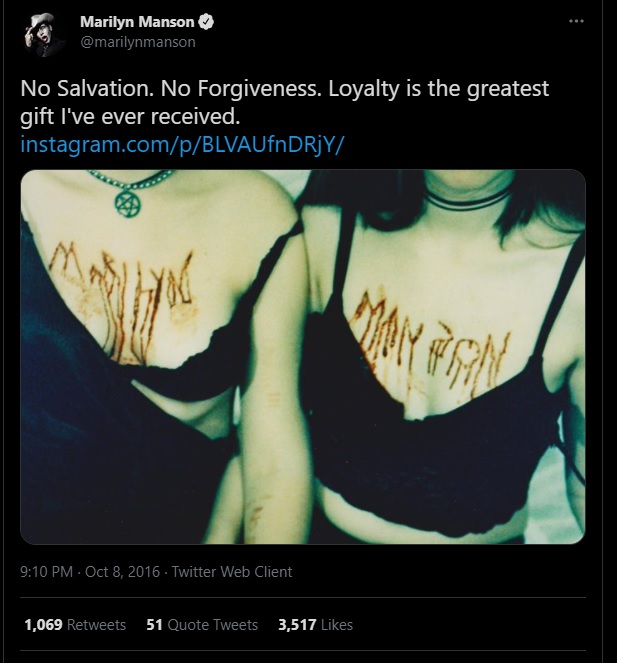 "It took Ms. Bianco years to understand the extent of Mr. Warner's physical, sexual, psychological, and emotional abuse. her career suffered due to the deterioration of her mental health," the lawsuit reads. "She deals with complex Post-Traumatic Stress Disdorder, anxiety, depression, and panic attacks to this day as a result."

The trafficking allegations come from instances when Manson is said to have brought Bianco to Los Angeles under the pretense of involving her in film projects that never happened.

Days after news of the lawsuit broke, People published a disturbing exclusive interview with Ashley Morgan Smithline, another former girlfriend of Manson who did not mince words when she stated, "I survived a monster." Please be aware that some of the information contained in that interview will be triggering to some.

Smithline's attorney Jay Ellwanger also spoke with People saying, "I am proud to represent Ms. Smithline as she comes forward to share her truth about Brian Warner. We are exploring all options to hold him accountable for his actions and to make sure that this behavior ends once and for all," leaving reason to believe that another lawsuit may be forthcoming.

"I was brainwashed," Smithline says about the relationship. She even showed People some of the scars that she bares to this day, which she claims Manson gave her, saying, "it makes me feel disgusting"

While the statement from Manson's spokesperson alleges that the relationship didn't last a week, Smithline claims that it spanned between the end of 2010 and January 2013.

Sharing similarities to other accusers, Smithline claims she suffers from OCD, night terrors and Post-Traumatic Stress Disorder who states her motivation for speaking out is to help stop the "most terrifying monster in the world."

"I'm not a victim," Smithline told People. "I'm a f*****g survivor. I want people to know who he is, and it's worth it if not one more woman gets hurt again."

In documents seen by Radar, Ashley Walters claims that Manson would regularly threaten her during "drug induced fits of rage" which included an incident where "he threw dishes at Walters, threatened to commit suicide and even pushed her into a wall."

The lawsuit even alleges that Manson told Walters that "he had gotten away with raping women" and claimed "he wanted to kill women he was involved with."

Walters' lawsuit even serves to corroborate some of the claims leveled by Bianco and Wood stating that she had snuck drinks and food to the two women while they were confined in bedrooms, allegedly because they were too afraid to leave.

On another instance the lawsuit states that Walters witnessed Manson "throw a prop skull so hard at Wood that it left a large raised welt on her stomach."