April 25, 2020, Lola Martin, the custodial guardian of a 7-year-old child, contacted the Mansfield Police Department concerning what appeared to be "appalling" injuries the child had sustained while in the care of his mother, Tosha Martin-Henning and her new husband, Joshua Henning.

The couple had been responsible for caring for the child over the proceeding two-week period.

According to the Mansfield News Journal, Martin had received a phone call from her daughter requesting that she come get the child. When she picked the boy up, "he had visible bruising to his body, cigarette burn to his face and cuts to his wrist."

"As they drove away, the 7-year-old asked [Martin] if she was ever going to make him go back there again," Jodie Schumacher, first assistant prosecutor stated on Tuesday, December 8 during Henning's sentencing hearting.

"Ms. Martin took the victim to the Ohio Health Hospital in Reynoldsburg, at which time he was transferred to Nationwide Children's Hospital in Columbus due to the severity of his injuries," the Mansfield News Journal quoted the affidavit as saying.

"There, his injuries were thoroughly documented: bruises from head to teo, conjunctivitis in the eye almost to the point he could not open them," Schumacher listed. "He had ligature marks on his wrists, as well as a ruptures eardrum to the point that it was bleeding."

Doctors additionally found scab wounds under the child's arms.  When "asked by doctors how he got them, the boy answered, 'Joshua connected me to a car battery.'"

The boy also told doctors that Henning had "made him sleep." "When asked what that meant, [he] demonstrated with his hands in a choking manner around his neck, squeezing and said, 'he made me go right to sleep. I couldn't breathe, but I survived.'"

During the two-weeks that the boy had been with Henning and Martin-Henning, the boy was reported to have lost ten pounds.

"This is one of the worst child abuse cases I have seen and I give credit to our detectives and patrol officers who worked together in an effort to quickly take those responsible, into custody," Mansfield Police Captain Shari Robertson was quoted as saying after the couple were taken into custody in the early morning hours April 26.

December 8, Henning appeared in court via a video link from the Richland County Jail and pleaded guilty to endangering a child, a second-degree felony, and a charge of domestic violence, a fourth-degree felony.

At the time of his arrest in April, he was on probation for a previous domestic violence conviction.

"I didn't do it your honor, I really didn't.  I was working at the time," Henning was heard saying as Richland County Common Pleas Court Judge Phil Naumoff held up three images of the boy's injuries to the camera.

The prosecution had recommended a sentence of five years as a part of the plea deal, but Naumoff rejected that recommendation. He sentenced Henning to the maximum allowed for the child endangerment charge and an additional 18 months for the domestic violence charge.  He will additionally be on probation for three years once he is released.

Henning reportedly began to cry as Naumoff continued to speak.

"I'm not buying any of it, Mr. Henning," Naumoff was quoted by the Mansfield News Journal as saying. "You tortured this young man, you've destroyed this young man's life early on and there's not a bit of remorse from you. Not a bit."

Also on Tuesday Martin-Henning pleaded guilty to one count each of endangering children and domestic violence. Her sentencing has been scheduled for February 2021. 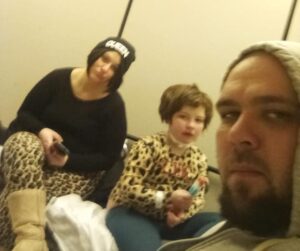