Anthony "Tony" Todt was just 4 when he was awoke in the middle of the night to the sound of his mother's scream.  What he lived through that night would be played out in court over the coming moths and leave a community stunned.

His father, Robert Todt, a respected member of the community, special education teacher and wrestling coach at the local school, was revealed to be living multiple lives.  While married to Anthony's mother, Loretta, he was also revealed to be dating a 17 year old and engaged to a nurse in another city.  They had gone so far as to reveal the engagement to her friends and family as well as speak with the local priest about the upcoming nuptials.

The man that served then as the young assistant district attorney on the case, Alan Rubenstein, is now 70 and serving the community as a judge.  He spoke with the Hartford Courant and said that he remembered the case.  He additionally remembered that the name Todt, in German, means "death."

Robert was convicted of hiring one of his former students to murder his wife.  It was argued that he even provided the 19 year old with not only a key to his home, but also the intended murder weapon.  He attempted to appeal the ruling, but his conviction was upheld in court.

Loretta survived the attempt on her life, but lost her left eye and lived the rest of her life with a bullet lodged in her skull that by all accounts should have cost her life.

Anthony Todt, now 44, has followed in his father's footsteps and according to a statement released by Osecola County Sheriff Russ Gibson, confessed to the murder of his family.

On December 29th the Sheriff's department was contacted by a family member requesting a wellness check.  They informed officers that they had been told the family was sick with the flu, but they were concerned as they had not heard from them in two day.

Officers reported to the residence but received no answer at the door.  "The deputy walked around the house, checked with neighbors.  The blinds of the home as closed.  Nothing suspicious was noted, and therefore they didn't enter the home," Sheriff Gibson said.

On January 9th federal agents contacted local authorities to request assistance with serving a warrant from the U.S. Department of Health and Human Services for Anthony for fraudulent bulling practices coming out of the Connecticut physical therapy business he owned with his wife.  They reported that they had been attempting to make contact over the weekend but that their attempts had been unsuccessful.

Officers from the Osceola Sheriffs Office arrived to the residence on January 13th to assist federal agents in serving the warrant and to simultaneously conduct another wellness check.

Officers contacted Anthony at the home and immediately detained him.  During a safety check of the home, the remains of four individuals and a dog were located.  The home was secured and a search warrant obtained.

Based on statements made by Anthony that he had taken pills, he was transported to a local hospital as a precautionary measure for treatment.  The hospital later released him and on Wednesday the 15th, he was arrested and charged with four counts of premeditated murder and one count of animal cruelty.

According to Sheriff Gibson's statement the medical examiner has ruled the cause of death for all four as homicide.  They have not disclosed the manner of death citing that it is very much an ongoing investigation.

Authorities have stated that they believe the murders happened at least two weeks before the bodies were discovered.

Sheriff Gibson further stated that Anthony is cooperating with the investigation and that based on his statements, though not officially confirmed by the coroner yet, the four deceased have been determined to be his wife, Megan, 42, his sons, Alek, 13, and Tyler, 11, and his daughter, Zoe, 4. 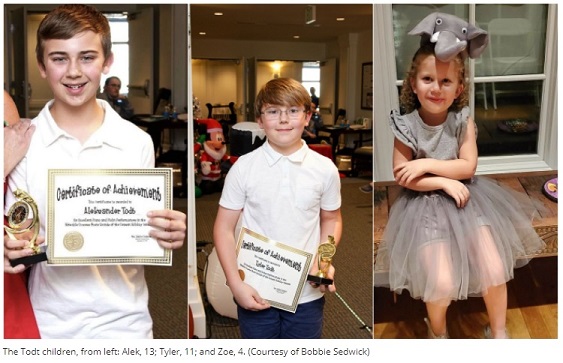 Anthony appeared in court yesterday where he was assigned a court appointed attorney and ordered to be held without bond.  His next court date is not known.