“Let them eat cake!” – a phrase often attributed to Marie Antoinette[1] during a nationwide famine, in response to hearing that the peasants had no bread—a testimony to her blatant disregard for her constituent’s inevitable starvation.

The elites have not changed much in the past three centuries. Now, we have NYC mayor, Bill De Blasio and his wife, Chirlane, dancing in the apocalyptically-empty streets of Times Square as if filming some sort of season finale for The Walking Dead.

Back in November, we all became painfully aware of a similar example of, “Rules for Thee, and not for Me,” when Governor Gavin Newsom (D-CA) was spotted maskless, dining indoors at a fancy dinner party in Napa.

But, back to Times Square, the impromptu “Dancing With the De Blasio’s” moment was infuriating to New Yorkers and Americans alike, on MANY levels. 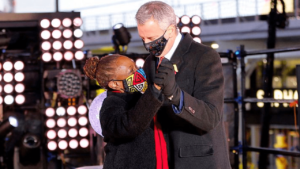 Look closely at the “pattern” on Mrs. De Balsio’s mask (the one covering her smirking mug). Look familiar? If not, allow me to direct you to a WikiLeaks article entitled, “FBI-pedophile-symbols.” Cry all you wish about the Pizzagate scandal being “debunked,” but this is straight from the FBI files, folks. 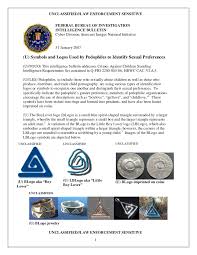 There, on the bottom left, you will see the triangular spiral pattern featured on Mrs. De Blasio’s mask. According to the FBI, this symbol means, “Boy Lover.” I can hear the protestations now, “It’s such a vague shape, it could mean anything!” And “It’s just a design!” And “The FBI would know about that symbol, but how would the mayor’s wife know?”

If we learned anything in 2020, it is that while the general public has been completely blind to the fact that this world is run by rich, elite, pedophiles…the rich, elite pedophiles are NOT blind to it…they’re up to their eyeballs in it. It’s their lifestyle. It’s not a secret amongst the mayors, the governors, the supreme court justices…and I’m willing to bet dollars to donuts, it is not a secret amongst the De Blasio family either.

These people know exactly what they are doing.