Las Vegas, Nevada: Las Vegas Metropolitan Police Homicide Lt. Ray Spencer just gave a statement to local media concerning the discovery this morning of a young child that was "clearly the victim of a homicide."

This morning at approximately 7:30 a group of individuals were hiking just off of State Route 160 near mile marker 20, near a town called Mountain Springs. This is the main corridor between Pahrump and Las Vegas, Nevada. 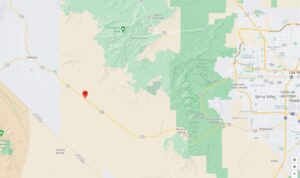 According to Spencer, one of the group that was hiking stepped behind a bush and found the remains of a child that they believe to be approximately 10-years-old.

"Could be a white male, he could be a Hispanic male, or he could even potentially be an Asian male juvenile," Spencer told gathered reporters. "He's somewhere between the ages of 8 and 12 years of age," and "he has dark black hair."

Spencer stated that they believe that the body was left there "very recently," within possibly the last 24-hours.

He additionally asked that anyone that cannot verify the location of a young child matching that description reach out to LVMPD Homicide at (702) 828-3521 or by emailing Homicide@lvmpd.com. Additionally, anyone wishing to remain anonymous may do so through Crime Stoppers.

"At this point it is very difficult for us until we can identify who this young boy is."

An update on the investigation will be given by LVMPD at 5:30 pm PST.