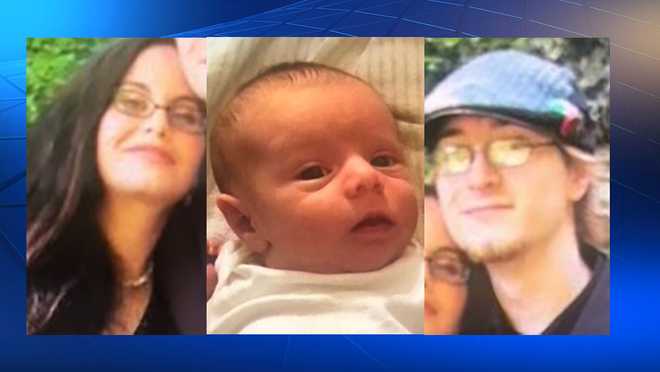 UPDATE: Yesterday at about 4:30 pm, Funnen, Klingensmith, and 8 week old Ambrose were located by authorities in Marshall County, Tennessee.

Abrose is now in the care of a doctor. and both Funnen and Klingensmith were arrested and are in the process of being extradited back to Pennsylvania.

After medical staff at  UPMC Children's Hospital of Pittsburgh informed Jeanette Funnen, 32, and Daemon Klingensmith, 23 yesterday, that their child, 7 week old Ambrose Klingensmith, had signs of abuse and needed additional examination to determine whether there were any internal injuries, they removed the child from the emergency room and took off.

West Mifflin Police are searching for the couple, and as of today, the FBI has joined in on the search as the police had a lead that told them the couple could be headed to Florida.

Both Funnen and Klingensmith have been charged with child endangerment and intimidation, retaliation or obstruction of a child abuse case.

They are believed to be driving a 2001 Buick Century with Pennsylvania license plate number LBD-6681. The car was last seen on Washington Road in Peters Township. Police also believe that Funnen's 3 year old son is in the vehicle with them.

Court documents include information allegedly provided by Children and Youth Services that Funnen had previously been the recipient of an emergency protective custody order and had two children removed from her care and custody.

An Amber Alert has not been issued concerning Ambrose as this is not an abduction.  Anyone with information regarding his whereabouts is encouraged to call the West Mifflin Police Department at 412-461-3125.