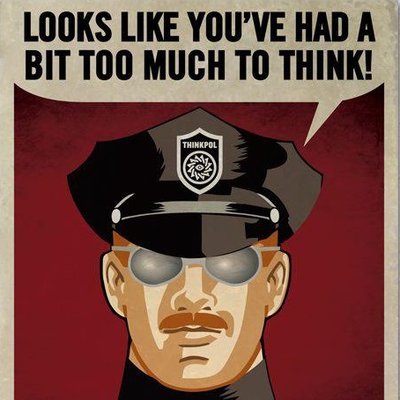 The only thing George Orwell got wrong was the year.

And as if we aren’t getting enough fascist groupthink, doublethink, and bewusstseinskontrolle (that’s mind control in the mother tongue—seig hiel!) firehosed down our throats every night on the news, let’s jazz socialism up with some pretty actresses and a modern soundtrack and Big Brother is going to look downright hip!

Hey, remember in the good old days when people went to movies to escape reality?

In this brave new world, Happiness is mandatory (“Achtung! You vhill be happy!“) And this sactioned serenity will be achieved via psychotropic drugs (Soma) and by the enforcement of these three simple rules:

Well, we’ve been implementing that for the past 20+ years, and as Dr. Phil would snidely say, “How’s that working for ya, America?”

This past June, George Orwell’s classic, 1984, turned 71 years old. Here are some of the things Orwell successfully “predicted.” (I put that in quotes because when you have an entire regime implementing an agenda, complete with a project management-like checklist, it is not that things prophetically occur, it is merely that agenda items are being put into practice and checked off the list).  This typically takes some time—not because the technology is not in place, but that a planet full of people with morals, ethics, spiritual beliefs, and a free will are not (see Overton Window).

Orwell’s dystopian world revolved around surveillance and censorship—and to think this guy died in 1950, long before the internet was “invented” (i.e. “unveiled to the pubic”). He knew nothing about the world we live in today—other than that it was “the plan” of the elites, such as himself.

Another severely underrated pop-culture prophet was Neil Postman (1931-2003). He wrote many books about where technology and media would take us as a culture, psychologically, relationally, and spiritually. And for a guy who was not a professing Christian, his insights were spot on. Here are a few of my favorite Postman quotes.

“Our youth must be shown that not all worthwhile things are instantly accessible and that there are levels of sensibility unknown to them.”

“Technopoly is to say that its information immune system is inoperable. Technopoly is a form of cultural AIDS, which I here use as an acronym for Anti-Information Deficiency Syndrome. This is why it is possible to say almost anything without contradiction provided you begin your utterance with the words “A study has shown …” or “Scientists now tell us that …”

Here are some off-the-top-of-my-head suggestions for mandatory happiness:

This formula is the only formula that will lead us to eternal joy.

If we ever get to the place as a culture, where these rights are taken from us upon pain of death, we choose death; and this too, will lead us to eternal joy. We cannot lose.

And if I go and prepare a place for you, I will come again, and receive you unto myself; that where I am, there ye may be also.