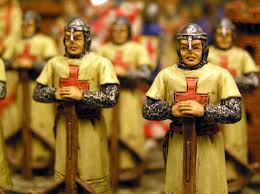 Well, folks, it’s what we have feared since that fateful Sunday night when we all got packed like cordwood into our burgundy, shag-carpeted, church sanctuaries back in the late 70s and were forced to watch that guillotine scene in Image of the Beast. How many of us went home that night, sick to our stomachs, and prayed with our moms to receive Jesus as our Savior out of fear of having our heads hacked off by a rogue government?

Queue the Secular Democrats of America PAC (political action committee) who recently prepared a memo for Joe Biden outlining a plan to, “boldly restore a vision of constitutional secularism and respect in a land for religious and intellectual pluralism.”

Unlike the folks who drafted the Pledge of Allegiance, where life, liberty, and justice for all were deemed the trifecta of any nation purporting to be “One Nation Under God,” the PAC offered the Biden administration a roadmap to restore and protect the basic constitutional rights of: science, reason, and public health for all. (I am not even making this up).

“We’ve offered the new administration a roadmap to restore our basic constitutional values and protect science, reason and public health in American government,” Raskin and Huffman said in a joint statement.”

The logic put forth in the document is that President Donald Trump, “empowered the religious right in ways no other administration has before,” which they fear will only incite them to enact their Christian “nationalist agenda.”

You see where this is going….

“The rise of white Christian nationalism is a national security threat,” read the document. “We recommend you: encourage the Department of Homeland Security and Department of Justice to dedicate resources to de-radicalization programs aimed at hate groups, including, but not limited to, white nationalists; increase monitoring of such groups, including the online environment, and take action to address increased hate crimes toward minority faith communities; and shift rhetoric to label violent white nationalist extremists as terrorists.”

How in the world did we go from “One Nation Under God” and having “freedom of religion” to worshipping God being a national security threat; or to Christians being labeled as a hate group, white nationalists, violent extremists, and terrorists?

The good news is, this is neither the first (or the last) time a godless government has attempted to overthrow righteousness or the people of God. And just because the PAC drafted a document, does not mean it will ever be implemented…not that we should be surprised if it is; because we have already been duly warned by the Apostle Paul that a time will come when they will no longer endure sound doctrine, but having itching ears, they will accumulate teachers (and government officials) in accordance with their own desires (2 Timothy 4:3).

Do not despair. As life, liberty, and justice for all are choked out and replaced with the Big Tech gods of science, reason, and public health, we know that we have the ultimate victory. May these times of chaos and confusion not lead us to despair, but rather to an ever-increasing joy that Christ’s millennial reign will one day replace this tyranny. In the meantime, we have work to do.

Occupy until He comes!